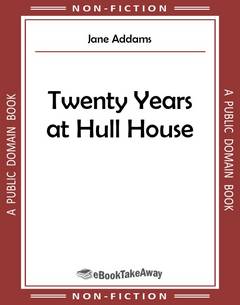 On the theory that our genuine impulses may be connected with our childish experiences, that one's bent may be tracked back to that "No-Man's Land" where character is formless but nevertheless settling into definite lines of future development, I begin this record with some impressions of my childhood.

All of these are directly connected with my father, although of course I recall many experiences apart from him. I was one of the younger members of a large family and an eager participant in the village life, but because my father was so distinctly the dominant influence and because it is quite impossible to set forth all of one's early impressions, it has seemed simpler to string these first memories on that single cord. Moreover, it was this cord which not only held fast my supreme affections, but also first drew me into the moral concerns of life, and later afforded a clew there to which I somewhat wistfully clung in the intricacy of its mazes.

It must have been from a very early period that I recall "horrid nights" when I tossed about in my bed because I had told a lie. I was held in the grip of a miserable dread of death, a double fear, first, that I myself should die in my sins and go straight to that fiery Hell which was never mentioned at home, but which I had heard all about from other children, and, second, that my father—representing the entire adult world which I had basely deceived—should himself die before I had time to tell him. My only method of obtaining relief was to go downstairs to my father's room and make full confession. The high resolve to do this would push me out of bed and carry me down the stairs without a touch of fear. But at the foot of the stairs I would be faced by the awful necessity of passing the front door—which my father, because of his Quaker tendencies, did not lock—and of crossing the wide and black expanse of the living room in order to reach his door. I would invariably cling to the newel post while I contemplated the perils of the situation, complicated by the fact that the literal first step meant putting my bare foot upon a piece of oilcloth in front of the door, only a few inches wide, but lying straight in my path. I would finally reach my father's bedside perfectly breathless and having panted out the history of my sin, invariable received the same assurance that if he "had a little girl who told lies," he was very glad that she "felt too bad to go to sleep afterward." No absolution was asked for or received, but apparently the sense that the knowledge of my wickedness was shared, or an obscure understanding of the affection which underlay the grave statement, was sufficient, for I always went back to bed as bold as a lion, and slept, if not the sleep of the just, at least that of the comforted.

I recall an incident which must have occurred before I was seven years old, for the mill in which my father transacted his business that day was closed in 1867. The mill stood in the neighboring town adjacent to its poorest quarter. Before then I had always seen the little city of ten thousand people with the admiring eyes of a country child, and it had never occurred to me that all its streets were not as bewilderingly attractive as the one which contained the glittering toyshop and the confectioner. On that day I had my first sight of the poverty which implies squalor, and felt the curious distinction between the ruddy poverty of the country and that which even a small city presents in its shabbiest streets. I remember launching at my father the pertinent inquiry why people lived in such horrid little houses so close together, and that after receiving his explanation I declared with much firmness when I grew up I should, of course, have a large house, but it would not be built among the other large houses, but right in the midst of horrid little houses like those.