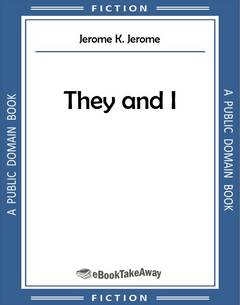 Download They and I by Jerome K. Jerome for iPhone, iPad, Nook, Android, and Kindle in PDF and all popular eBook reader formats (AZW3, EPUB, MOBI).

“It is not a large house,” I said.  “We don’t want a large house.  Two spare bedrooms, and the little three-cornered place you see marked there on the plan, next to the bathroom, and which will just do for a bachelor, will be all we shall require—at all events, for the present.  Later on, if I ever get rich, we can throw out a wing.  The kitchen I shall have to break to your mother gently.  Whatever the original architect could have been thinking of—”

“Never mind the kitchen,” said Dick: “what about the billiard-room?”

The way children nowadays will interrupt a parent is nothing short of a national disgrace.  I also wish Dick would not sit on the table, swinging his legs.  It is not respectful.  “Why, when I was a boy,” as I said to him, “I should as soon have thought of sitting on a table, interrupting my father—”

“What’s this thing in the middle of the hall, that looks like a grating?” demanded Robina.

“She means the stairs,” explained Dick.

“Then why don’t they look like stairs?” commented Robina.

“They do,” replied Dick, “to people with sense.”

“They don’t,” persisted Robina, “they look like a grating.”  Robina, with the plan spread out across her knee, was sitting balanced on the arm of an easy-chair.  Really, I hardly see the use of buying chairs for these people.  Nobody seems to know what they are for—except it be one or another of the dogs.  Perches are all they want.

“If we threw the drawing-room into the hall and could do away with the stairs,” thought Robina, “we should be able to give a dance now and then.”

“Perhaps,” I suggested, “you would like to clear out the house altogether, leaving nothing but the four bare walls.  That would give us still more room, that would.  For just living in, we could fix up a shed in the garden; or—”

“I’m talking seriously,” said Robina: “what’s the good of a drawing-room?  One only wants it to show the sort of people into that one wishes hadn’t come.  They’d sit about, looking miserable, just as well anywhere else.  If we could only get rid of the stairs—”

“Oh, of course! we could get rid of the stairs,” I agreed.  “It would be a bit awkward at first, when we wanted to go to bed.  But I daresay we should get used to it.  We could have a ladder and climb up to our rooms through the windows.  Or we might adopt the Norwegian method and have the stairs outside.”

“I wish you would be sensible,” said Robin.

“I am trying to be,” I explained; “and I am also trying to put a little sense into you.  At present you are crazy about dancing.  If you had your way, you would turn the house into a dancing-saloon with primitive sleeping-accommodation attached.  It will last six months, your dancing craze.  Then you will want the house transformed into a swimming-bath, or a skating-rink, or cleared out for hockey.  My idea may be conventional.  I don’t expect you to sympathise with it.  My notion is just an ordinary Christian house, not a gymnasium.  There are going to be bedrooms in this house, and there’s going to be a staircase leading to them.  It may strike you as sordid, but there is also going to be a kitchen: though why when building the house they should have put the kitchen—

“If you thought more of your future career and less about billiards,” Robin pointed out to him, “perhaps you’d get through your Little-go in the course of the next few years.  If Pa only had sense—I mean if he wasn’t so absurdly indulgent wherever you are concerned, he would not have a billiard-table in the house.”

“You talk like that,” retorted Dick, “merely because you can’t play.”

“I can beat you, anyhow,” retorted Robin.

“Once,” admitted Dick—“once in six weeks.”

“You don’t play,” Dick explained to her; “you just whack round and trust to Providence.”

“You both of you,” I said, “attach too much importance to the score.  When you try for a cannon off the white and hit it on the wrong side and send it into a pocket, and your own ball travels on and makes a losing hazard off the red, instead of being vexed with yourselves—”

“If you get a really good table, governor,” said Dick, “I’ll teach you billiards.”

I do believe Dick really thinks he can play.  It is the same with golf.  Beginners are invariably lucky.  “I think I shall like it,” they tell you; “I seem to have the game in me, if you understand.”

‘There is a friend of mine, an old sea-captain.  He is the sort of man that when the three balls are lying in a straight line, tucked up under the cushion, looks pleased; because then he knows he can make a cannon and leave the red just where he wants it.  An Irish youngster named Malooney, a college chum of Dick’s, was staying with us; and the afternoon being wet, the Captain said he would explain it to Malooney, how a young man might practise billiards without any danger of cutting the cloth.  He taught him how to hold the cue, and he told him how to make a bridge.  Malooney was grateful, and worked for about an hour.  He did not show much promise.  He is a powerfully built young man, and he didn’t seem able to get it into his head that he wasn’t playing cricket.  Whenever he hit a little low the result was generally lost ball.  To save time—and damage to furniture—Dick and I fielded for him.  Dick stood at long-stop, and I was short slip.  It was dangerous work, however, and when Dick had caught him out twice running, we agreed that we had won, and took him in to tea.  In the evening—none of the rest of us being keen to try our luck a second time—the Captain said, that just for the joke of the thing he would give Malooney eighty-five and play him a hundred up.  To confess the truth, I find no particular fun myself in playing billiards with the Captain.  The game consists, as far as I am concerned, in walking round the table, throwing him back the balls, and saying “Good!”  By the time my turn comes I don’t seem to care what happens: everything seems against me.  He is a kind old gentleman and he means well, but the tone in which he says “Hard lines!” whenever I miss an easy stroke irritates me.  I feel I’d like to throw the balls at his head and fling the table out of window.  I suppose it is that I am in a fretful state of mind, but the mere way in which he chalks his cue aggravates me.  He carries his own chalk in his waistcoat pocket—as if our chalk wasn’t good enough for him—and when he has finished chalking, he smooths the tip round with his finger and thumb and taps the cue against the table.  “Oh! go on with the game,” I want to say to him; “don’t be so full of tricks.”