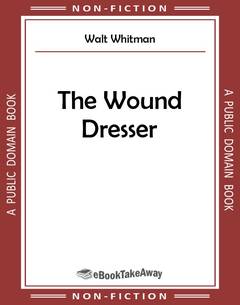 THE GREAT ARMY OF THE WOUNDED

The military hospitals, convalescent camps, etc., in Washington and its neighborhood, sometimes contain over fifty thousand sick and wounded men. Every form of wound (the mere sight of some of them having been known to make a tolerably hardy visitor faint away), every kind of malady, like a long procession, with typhoid fever and diarrhœa at the head as leaders, are here in steady motion. The soldier’s hospital! how many sleepless nights, how many women’s tears, how many long and waking hours and days of suspense, from every one of the Middle, Eastern, and Western States, have concentrated here! Our own New York, in the form of hundreds and thousands of her young men, may consider herself here—Pennsylvania, Ohio, Indiana, and all the West and Northwest the same—and all the New England States the same.

Upon a few of these hospitals I have been almost daily calling as a missionary, on my own account, for the sustenance and consolation of some of the most needy cases of sick and dying men, for the last two months. One has much to learn to do good in these places. Great tact is required. These are not like other hospitals. By far the greatest proportion (I should say five sixths) of the patients are American young men, intelligent, of independent spirit, tender feelings, used to a hardy and healthy life; largely the farmers are represented by their sons—largely the mechanics and workingmen of the cities. Then they are soldiers. All these points must be borne in mind.

People through our Northern cities have little or no idea of the great and prominent feature which these military hospitals and convalescent camps make in and around Washington. There are not merely two or three or a dozen, but some fifty of them, of different degrees of capacity. Some have a thousand and more patients. The newspapers here find it necessary to print every day a directory of the hospitals—a long list, something like what a directory of the churches would be in New York, Philadelphia, or Boston.

The Government (which really tries, I think, to do the best and quickest it can for these sad necessities) is gradually settling down to adopt the plan of placing the hospitals in clusters of one-story wooden barracks, with their accompanying tents and sheds for cooking and all needed purposes. Taking all things into consideration, no doubt these are best adapted to the purpose; better than using churches and large public buildings like the Patent office. These sheds now adopted are long, one-story edifices, sometimes ranged along in a row, with their heads to the street, and numbered either alphabetically, Wards A or B, C, D, and so on; or Wards 1, 2, 3, etc. The middle one will be marked by a flagstaff, and is the office of the establishment, with rooms for the ward surgeons, etc. One of these sheds, or wards, will contain sixty cots; sometimes, on an emergency, they move them close together, and crowd in more. Some of the barracks are larger, with, of course, more inmates. Frequently there are tents, more comfortable here than one might think, whatever they may be down in the army.

Each ward has a ward-master, and generally a nurse for every ten or twelve men. A ward surgeon has, generally, two wards—although this varies. Some of the wards have a woman nurse; the Armory-square wards have some very good ones. The one in Ward E is one of the best.