The Wanderings and Homes of Manuscripts 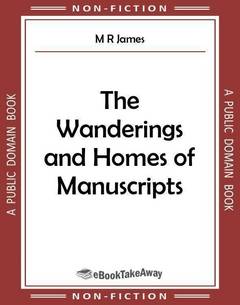 Download The Wanderings and Homes of Manuscripts by M. R. James for iPhone, iPad, Nook, Android, and Kindle in PDF and all popular eBook reader formats (AZW3, EPUB, MOBI).

The Wanderings and Homes of Manuscripts is the title of this book. To have called it the survival and transmission of ancient literature would have been pretentious, but not wholly untruthful. Manuscripts, we all know, are the chief means by which the records and imaginings of twenty centuries have been preserved. It is my purpose to tell where manuscripts were made, and how and in what centres they have been collected, and, incidentally, to suggest some helps for tracing out their history. Naturally the few pages into which the story has to be packed will not give room for any one episode to be treated exhaustively. Enough if I succeed in rousing curiosity and setting some student to work in a field in which an immense amount still remains to be discovered.

In treating of so large a subject as this—for it is a large one—it is not a bad plan to begin with the particular and get gradually to the general.

Some Specimen Pedigrees of MSS.

I take my stand before the moderate-sized bookcase which contains the collection of MSS. belonging to the College of Eton, and with due care draw from the shelves a few of the books which have reposed there since the room was built in 1729.

The first shelf I lay hands upon contains some ten large folios. Four of them are a single great compilation, beginning with a survey of the history of the world and of the Roman Empire, and merging into the heraldry of the German noblesse. It was made, we find, in 1541, and is dedicated to Henry VIII. Large folding pictures on vellum and portraits of all the Roman Emperors adorn the first volume. It is a sumptuous book, supposed to be a present from the Emperor Ferdinand to the King. How did it come here? A printed label tells us that it was given to the college by Henry Temple, Viscount Palmerston, in 1750 (he had previously given it to Sir Richard Ellys on whose death Lady Ellys returned it: so much in parenthesis). Then, more by luck than anything else, I find mention of it in the diary of Thomas Hearne, the Oxford antiquary; his friend Thomas Jett, F.R.S., owned it and told him about it in 1722: he had been offered £100 a volume for it; it was his by purchase from one Mr. Stebbing. It was sold, perhaps to Palmerston, at Jett's auction in 1731. The gap between Henry VIII. and Stebbing remains for the present unfilled. So much for the first draw.

Next, a yet larger and more ponderous volume, Decreta Romanorum Pontificum—the Papal decretals and the Acts of the Councils. It is spotlessly clean and magnificently written in a hand of the early part of the twelfth century, a hand which very much resembles that in use at Christchurch, Canterbury. I am indeed, tempted to call it a Canterbury book; only it bears none of the marks which it ought to have if it was ever in the library of the Cathedral Priory. Was it perhaps written there and sold or given to a daughter-house, or to some abbey which had a less skilful school of writers? Not to Rochester, at any rate, though Rochester did get many books written at Christchurch. If it had belonged to Rochester there would have been some trace, I think, of an inscription on the lower margin of the first leaf. No; the only clue to the history is a title written on the fly-leaf in the fifteenth century, which says: "The book of the decrees of the Pope of Rome," and it begins on the second leaf "tes viii." That does not tell us much; I do not recognize the handwriting of the title, though I guess it to have been written when the book came to Eton College. All I can say is that here is an example of a large class, duplicates of indispensable and common works, which the abbey libraries possessed in great numbers, and often parted with, in the fourteenth and fifteenth centuries, to colleges and private purchasers.

Next we take out a thin folio written on paper. This time it is a Greek book which we open; it has the works of the Christian apologists Athenagoras and Tatian, and a spurious epistle of Justin Martyr, copied in 1534 by Valeriano of Forlí. A single MS. now at Paris, written in 914, is the ancestor of all our copies of these texts; but it has been shown that this Eton book is not an immediate copy of that, but of one now at Bologna. Obviously it was written in Italy. How does it come to be here? Sir Henry Wotton, Provost of the college, spent the best part of twenty years in Italy, mainly as Ambassador to the Court of Venice for James I., and left all his MSS. to the college at his death in 1639. There are numbers of MSS. from Italy in this bookcase, and, though hardly any of them have Wotton's name in them, it is not to be doubted that they came from him. A good proportion of them, too, can be traced back a step farther, for they have in them the name or the arms or the handwriting of Bernardo Bembo of Venice, the father of the more famous Cardinal Pietro Bembo. This Justin volume is not of that number, but we have a clue to its history which may be deemed sufficient.