The Valley of Decision 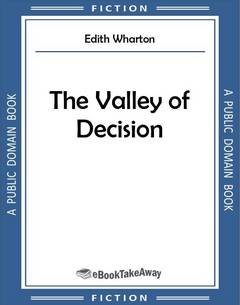 Read an excerpt and download The Valley of Decision by Edith Wharton for iPhone, iPad, Nook, Android, and Kindle in PDF and all popular eBook reader formats (AZW3, EPUB, MOBI).

Set in late 18th century Italy, Valsecca inherits a dukedom at a young age. During the French Revolution he had allied himself with the forces of social reform. Now he must face the tradition of feudalism, which comes with his social class. He struggles with these conflicting loyalties.

It was very still in the small neglected chapel. The noises of the farm came faintly through closed doors—voices shouting at the oxen in the lower fields, the querulous bark of the old house-dog, and Filomena's angry calls to the little white-faced foundling in the kitchen.

The February day was closing, and a ray of sunshine, slanting through a slit in the chapel wall, brought out the vision of a pale haloed head floating against the dusky background of the chancel like a water-lily on its leaf. The face was that of the saint of Assisi—a sunken ravaged countenance, lit with an ecstasy of suffering that seemed not so much to reflect the anguish of the Christ at whose feet the saint knelt, as the mute pain of all poor down-trodden folk on earth.

When the small Odo Valsecca—the only frequenter of the chapel—had been taunted by the farmer's wife for being a beggar's brat, or when his ears were tingling from the heavy hand of the farmer's son, he found a melancholy kinship in that suffering face; but since he had fighting blood in him too, coming on the mother's side of the rude Piedmontese stock of the Marquesses di Donnaz, there were other moods when he turned instead to the stout Saint George in gold armour, just discernible through the grime and dust of the opposite wall.

The chapel of Pontesordo was indeed as wonderful a storybook as fate ever unrolled before the eyes of a neglected and solitary child. For a hundred years or more Pontesordo, a fortified manor of the Dukes of Pianura, had been used as a farmhouse; and the chapel was never opened save when, on Easter Sunday, a priest came from the town to say mass. At other times it stood abandoned, cobwebs curtaining the narrow windows, farm tools leaning against the walls, and the dust deep on the sea-gods and acanthus volutes of the altar. The manor of Pontesordo was very old. The country people said that the great warlock Virgil, whose dwelling-place was at Mantua, had once shut himself up for a year in the topmost chamber of the keep, engaged in unholy researches; and another legend related that Alda, wife of an early lord of Pianura, had thrown herself from its battlements to escape the pursuit of the terrible Ezzelino. The chapel adjoined this keep, and Filomena, the farmer's wife, told Odo that it was even older than the tower and that the walls had been painted by early martyrs who had concealed themselves there from the persecutions of the pagan emperors.