The Shadow of Victory 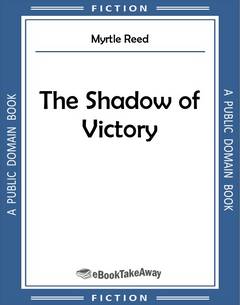 Download The Shadow of Victory by Myrtle Reed for iPhone, iPad, Nook, Android, and Kindle in PDF and all popular eBook reader formats (AZW3, EPUB, MOBI).

CHAPTER I
THE PROPHECY

It was a long, low room, with a fireplace, roughly built of limestone, at one end of it. The blazing logs illuminated one corner and sent strange shadows into the others, while the winter wind moaned drearily outside. At the right and left of the fireplace were rude counters, hewn from logs, resting on stumps of unequal height, and behind them were shelves, packed with the sordid miscellany of a frontier trading-post. A closed door on either side seemingly led to other apartments, but there was no sound save the wind and the crackle of the flames.

A candle, thrust into the broken neck of a bottle, gave a feeble light to a little space around one end of the counter on which it stood. The rafters were low—so low that a tall man, standing on tiptoe, might easily unhook the smoked hams and sides of bacon that hung there, swaying back and forth when the wind shook the house.

Walls, ceiling, and floor were of logs, cut into a semblance of smoothness. The chinks were plastered with a bluish clay, and the crevices in the floor were filled with a mixture of clay and small chips. At the left of the chimney was a rude ladder which led to the loft through an opening in the ceiling. Fingers of sleet tapped at the glass, swirling phantoms of snow drifted by, pausing for a moment at the windows, as if to look within, and one of the men moved his chair closer to the fire.

"You fed the cattle, didn't you, Chan?" The half-breed grunted assent.

It was the eldest of the three who had spoken. His crouching position in his chair partially concealed his great height, but the firelight shone full upon his iron-grey hair and the deep lines seamed upon his kindly face. His hands were rough and knotted, his fingers straight and square at the tips—hands without beauty, but full of strength.

The hand which rested on the arm of the chair next to him was entirely different. It was fair and smooth and slender, with tapering fingers, and with the outer line of the palm delicately curved; instinct with strength of another sort, yet gentle almost to the point of femininity. The hand accorded ill with the deep, melodious voice of the man, when he said:

"Uncle, you don't know how glad I am to be here with you and Aunt Eleanor. I feel as if I had come home at last, after many wanderings."

"You're welcome, my boy," was the hearty answer. "I'm glad you got through before this storm came, 'cause travellin' 'cross country isn't good in February, as a rule. Things will be closed up now till Spring."

"And then—what?" asked the young man.

"Trains of pack-horses from Rock River and the Illinois. Canoes and a bateau from Milwaukee, in charge of Canadian engagés. Then the vessel from Fort Mackinac with goods for the trade, and Indians from all over creation. The busy season begins in the Spring."

Chandonnais, the half-breed, was audibly asleep in his warm corner, and the guest arose to walk nervously about the room. He was clad in rusty black broadcloth, which had seen all of its best days and some of its worst, and clung closely to his tall, lank figure, as though in fear of the ultimate separation. His hair was black and straight, his eyes deep brown and strangely luminous, his mouth sensitive, and his face very pale. He was not more than twenty-five or six, and looked even younger.

John Mackenzie quietly watched him in his uneasy march back and forth. At last he came to the fire, stopped short, and put a questioning finger upon the limestone. "Here's some initials," he said. "J. B. P. D. S.—what does that stand for?"

"Jean Baptiste Pointe de Saible, I reckon," replied Mackenzie. "He built this cabin. The Indians say that the first white man here was a negro."

"Pierre Le Mai, I guess—the French trader I bought the place from."

"You should put yours here, too, Uncle."

"Not I, my boy. I have come to stay—and my children after me."

"That reminds me of my young charge. Shall we begin to-morrow?"

"As you like. The sooner the better, I suppose. You brought books, didn't you?"

"Johnny has a spelling-book that came from Mackinac in a chest of green tea, when the vessel touched here last year. He was very anxious then to know what was inside of it, but I don't know how he feels now."

"Have you any special instructions for me?"

"No," answered Mackenzie, rising. He put his hand on the young man's shoulder and looked down into his face. "I never had much book-learning," he said, "'cause I ran away from school, but I want that my son should have it. Teach him everything you know that he can learn; it won't hurt him none. Teach him to tell the truth, to be afraid of nothing but dishonour, and to be kind to women. You look like your mother, boy."

The door opened suddenly, and the gust of wind that came in with it put out the candle and filled the room with the odour of burning tallow. "How!" grunted a stalwart Indian, in general salutation.