The Principles of Scientific Management 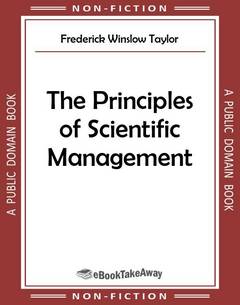 The words "maximum prosperity" are used, in their broad sense, to mean not only large dividends for the company or owner, but the development of every branch of the business to its highest state of excellence, so that the prosperity may be permanent. In the same way maximum prosperity for each employee means not only higher wages than are usually received by men of his class, but, of more importance still, it also means the development of each man to his state of maximum efficiency, so that he may be able to do, generally speaking, the highest grade of work for which his natural abilities fit him, and it further means giving him, when possible, this class of work to do.

It would seem to be so self-evident that maximum prosperity for the employer, coupled with maximum prosperity for the employee, ought to be the two leading objects of management, that even to state this fact should be unnecessary. And yet there is no question that, throughout the industrial world, a large part of the organization of employers, as well as employees, is for war rather than for peace, and that perhaps the majority on either side do not believe that it is possible so to arrange their mutual relations that their interests become identical.

The majority of these men believe that the fundamental interests of employees and employers are necessarily antagonistic. Scientific management, on the contrary, has for its very foundation the firm conviction that the true interests of the two are one and the same; that prosperity for the employer cannot exist through a long term of years unless it is accompanied by prosperity for the employee, and vice versa; and that it is possible to give the workman what he most wants—high wages—and the employer what he wants—a low labor cost—for his manufactures.

It is hoped that some at least of those who do not sympathize with each of these objects may be led to modify their views; that some employers, whose attitude toward their workmen has been that of trying to get the largest amount of work out of them for the smallest possible wages, may be led to see that a more liberal policy toward their men will pay them better; and that some of those workmen who begrudge a fair and even a large profit to their employers, and who feel that all of the fruits of their labor should belong to them, and that those for whom they work and the capital invested in the business are entitled to little or nothing, may be led to modify these views.

No one can be found who will deny that in the case of any single individual the greatest prosperity can exist only when that individual has reached his highest state of efficiency; that is, when he is turning out his largest daily output.

The truth of this fact is also perfectly clear in the case of two men working together. To illustrate: if you and your workman have become so skilful that you and he together are making two pairs of, shoes in a day, while your competitor and his workman are making only one pair, it is clear that after selling your two pairs of shoes you can pay your workman much higher wages than your competitor who produces only one pair of shoes is able to pay his man, and that there will still be enough money left over for you to have a larger profit than your competitor.

In the case of a more complicated manufacturing establishment, it should also be perfectly clear that the greatest permanent prosperity for the workman, coupled with the greatest prosperity for the employer, can be brought about only when the work of the establishment is done with the smallest combined expenditure of human effort, plus nature's resources, plus the cost for the use of capital in the shape of machines, buildings, etc. Or, to state the same thing in a different way: that the greatest prosperity can exist only as the result of the greatest possible productivity of the men and machines of the establishment—that is, when each man and each machine are turning out the largest possible output; because unless your men and your machines are daily turning out more work than others around you, it is clear that competition will prevent your paying higher wages to your workmen than are paid to those of your competitor. And what is true as to the possibility of paying high wages in the case of two companies competing close beside one another is also true as to whole districts of the country and even as to nations which are in competition. In a word, that maximum prosperity can exist only as the result of maximum productivity. Later in this paper illustrations will be given of several companies which are earning large dividends and at the same time paying from 30 per cent to 100 per cent higher wages to their men than are paid to similar men immediately around them, and with whose employers they are in competition. These illustrations will cover different types of work, from the most elementary to the most complicated.