The Politeness of Princes 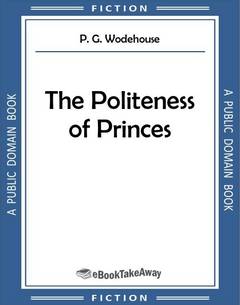 Download The Politeness of Princes by P.G. Wodehouse for iPhone, iPad, Nook, Android, and Kindle in PDF and all popular eBook reader formats (AZW3, EPUB, MOBI).

THE POLITENESS OF PRINCES

The painful case of G. Montgomery Chapple, bachelor, of Seymour's house, Wrykyn. Let us examine and ponder over it.

It has been well said that this is the age of the specialist. Everybody, if they wish to leave the world a better and happier place for their stay in it, should endeavour to adopt some speciality and make it their own. Chapple's speciality was being late for breakfast. He was late not once or twice, but every day. Sometimes he would scramble in about the time of the second cup of coffee, buttoning his waistcoat as he sidled to his place. Generally he would arrive just as the rest of the house were filing out; when, having lurked hidden until Mr. Seymour was out of the way, he would enter into private treaty with Herbert, the factotum, who had influence with the cook, for Something Hot and maybe a fresh brew of coffee. For there was nothing of the amateur late-breakfaster about Chapple. Your amateur slinks in with blushes deepening the naturally healthy hue of his face, and, bolting a piece of dry bread and gulping down a cup of cold coffee, dashes out again, filled more with good resolutions for the future than with food. Not so Chapple. He liked his meals. He wanted a good deal here below, and wanted it hot and fresh. Conscience had but a poor time when it tried to bully Chapple. He had it weak in the first round.

But there was one more powerful than Conscience-Mr. Seymour. He had marked the constant lateness of our hero, and disapproved of it.

Thus it happened that Chapple, having finished an excellent breakfast one morning some twenty minutes after everybody else, was informed as he sat in the junior day-room trying, with the help of an illustrated article in a boys' paper, to construct a handy model steam-engine out of a reel of cotton and an old note-book-for his was in many ways a giant brain-that Mr. Seymour would like to have a friendly chat with him in his study. Laying aside his handy model steam-engine, he went off to the housemaster's study.

"You were late for breakfast to-day," said Mr. Seymour, in the horrid, abrupt way housemasters have.

"And the day before."

"And the day before that."

Chapple did not deny it. He stood on one foot and smiled a propitiating smile. So far Mr. Seymour was entitled to demand a cigar or cocoanut every time.

The housemaster walked to the window, looked out, returned to the mantelpiece, and shifted the position of a china vase two and a quarter inches to the left. Chapple, by way of spirited repartee, stood on the other leg and curled the disengaged foot round his ankle. The conversation was getting quite intellectual.

"It's awfully hard to hear the bell from where I sleep, sir."

Owing to the increased numbers of the house this term Chapple had been removed from his dormitory proper to a small room some distance away.

"Nonsense. The bell can be heard perfectly well all over the house."

There was reason in what he said. Herbert, who woke the house of a morning, did so by ringing a bell. It was a big bell, and he enjoyed ringing it. Few sleepers, however sound, could dream on peacefully through Herbert's morning solo. After five seconds of it they would turn over uneasily. After seven they would sit up. At the end of the first quarter of a minute they would be out of bed, and you would be wondering where they picked up such expressions.

Chapple murmured wordlessly in reply. He realised that his defence was a thin one. Mr. Seymour followed up his advantage.

"You will write a hundred lines of Vergil," he said, "and if you are late again to-morrow I shall double them."

This, he felt, was a crisis. He had been pursuing his career of unpunctuality so long that he had never quite realised that a time might come when the authorities would drop on him. For a moment he felt that it was impossible, that he could not meet Mr. Seymour's wishes in the matter; but the bull-dog pluck of the true Englishman caused him to reconsider this. He would at least have a dash at it.

"I'll tell you what to do," said his friend, Brodie, when consulted on the point over a quiet pot of tea that afternoon. "You ought to sleep without so many things on the bed. How many blankets do you use, for instance?"

It had never occurred to him to reckon up the amount of his bedclothes before retiring to rest.