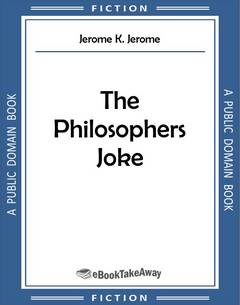 Read an excerpt and download The Philosophers Joke by Jerome K. Jerome for iPhone, iPad, Nook, Android, and Kindle in PDF and all popular eBook reader formats (AZW3, EPUB, MOBI).

Myself, I do not believe this story. Six persons are persuaded of its truth; and the hope of these six is to convince themselves it was an hallucination. Their difficulty is there are six of them. Each one alone perceives clearly that it never could have been. Unfortunately, they are close friends, and cannot get away from one another; and when they meet and look into each other's eyes the thing takes shape again.

The one who told it to me, and who immediately wished he had not, was Armitage. He told it to me one night when he and I were the only occupants of the Club smoking-room. His telling me—as he explained afterwards—was an impulse of the moment. Sense of the thing had been pressing upon him all that day with unusual persistence; and the idea had occurred to him, on my entering the room, that the flippant scepticism with which an essentially commonplace mind like my own—he used the words in no offensive sense—would be sure to regard the affair might help to direct his own attention to its more absurd aspect. I am inclined to think it did. He thanked me for dismissing his entire narrative as the delusion of a disordered brain, and begged me not to mention the matter to another living soul. I promised; and I may as well here observe that I do not call this mentioning the matter. Armitage is not the man's real name; it does not even begin with an A. You might read this story and dine next to him the same evening: you would know nothing.

Also, of course, I did not consider myself debarred from speaking about it, discreetly, to Mrs. Armitage, a charming woman. She burst into tears at the first mention of the thing. It took me all I knew to tranquillize her. She said that when she did not think about the thing she could be happy. She and Armitage never spoke of it to one another; and left to themselves her opinion was that eventually they might put remembrance behind them. She wished they were not quite so friendly with the Everetts. Mr. and Mrs. Everett had both dreamt precisely the same dream; that is, assuming it was a dream. Mr. Everett was not the sort of person that a clergyman ought, perhaps, to know; but as Armitage would always argue: for a teacher of Christianity to withdraw his friendship from a man because that man was somewhat of a sinner would be inconsistent. Rather should he remain his friend and seek to influence him. They dined with the Everetts regularly on Tuesdays, and sitting opposite the Everetts, it seemed impossible to accept as a fact that all four of them at the same time and in the same manner had fallen victims to the same illusion. I think I succeeded in leaving her more hopeful. She acknowledged that the story, looked at from the point of common sense, did sound ridiculous; and threatened me that if I ever breathed a word of it to anyone, she never would speak to me again. She is a charming woman, as I have already mentioned.