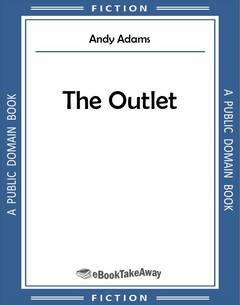 Read an excerpt and download The Outlet by Andy Adams for iPhone, iPad, Nook, Android, and Kindle in PDF and all popular eBook reader formats (AZW3, EPUB, MOBI).

CHAPTER I. OPENING THE CAMPAIGN

"Well, gentlemen, if that is the best rate you can offer us, then we'll drive the cattle. My boys have all been over the trail before, and your figures are no inducement to ship as far as Red River. We are fully aware of the nature of the country, but we can deliver the herds at their destination for less than you ask us for shipping them one third of the distance. No; we'll drive all the way."

The speaker was Don Lovell, a trail drover, and the parties addressed were the general freight agents of three railroad lines operating in Texas. A conference had been agreed upon, and we had come in by train from the ranch in Medina County to attend the meeting in San Antonio. The railroad representatives were shrewd, affable gentlemen, and presented an array of facts hard to overcome. They were well aware of the obstacles to be encountered in the arid, western portion of the state, and magnified every possibility into a stern reality. Unrolling a large state map upon the table, around which the principals were sitting, the agent of the Denver and Fort Worth traced the trail from Buffalo Gap to Doan's Crossing on Red River. Producing what was declared to be a report of the immigration agent of his line, he showed by statistics that whole counties through which the old trail ran had recently been settled up by Scandinavian immigrants. The representative of the Missouri, Kansas, and Texas, when opportunity offered, enumerated every disaster which had happened to any herd to the westward of his line in the past five years. The factor of the International was equally well posted.

"Now, Mr. Lovell," said he, dumping a bundle of papers on the table, "if you will kindly glance over these documents, I think I can convince you that it is only a question of a few years until all trail cattle will ship the greater portion of the way. Here is a tabulated statement up to and including the year '83. From twenty counties tributary to our line and south of this city, you will notice that in '80 we practically handled no cattle intended for the trail. Passing on to the next season's drive, you see we secured a little over ten per cent. of the cattle and nearly thirty per cent. of the horse stock. Last year, or for '83, drovers took advantage of our low rates for Red River points, and the percentage ran up to twenty-four and a fraction, or practically speaking, one fourth of the total drive. We are able to offer the same low rates this year, and all arrangements are completed with our connecting lines to give live-stock trains carrying trail cattle a passenger schedule. Now, if you care to look over this correspondence, you will notice that we have inquiries which will tax our carrying capacity to its utmost. The 'Laurel Leaf' and 'Running W' people alone have asked for a rate on thirty thousand head."

But the drover brushed the correspondence aside, and asked for the possible feed bills. A blanket rate had been given on the entire shipment from that city, or any point south, to Wichita Falls, with one rest and feed. Making a memorandum of the items, Lovell arose from the table and came over to where Jim Flood and I were searching for Fort Buford on a large wall map. We were both laboring under the impression that it was in Montana, but after our employer pointed it out to us at the mouth of the Yellowstone in Dakota, all three of us adjourned to an ante-room. Flood was the best posted trail foreman in Don Lovell's employ, and taking seats at the table, we soon reduced the proposed shipping expense to a pro-rata sum per head. The result was not to be considered, and on returning to the main office, our employer, as already expressed, declined the proffered rate.

Then the freight men doubled on him, asking if he had taken into consideration a saving in wages. In a two days' run they would lay down the cattle farther on their way than we could possibly drive in six weeks, even if the country was open, not to say anything about the wear and tear of horseflesh. But Don Lovell had not been a trail drover for nearly fifteen years without understanding his business as well as the freight agents did theirs. After going over a large lot of other important data, our employer arose to take his leave, when the agent of the local line expressed a hope that Mr. Lovell would reconsider his decision before spring opened, and send his drive a portion of the way by rail.