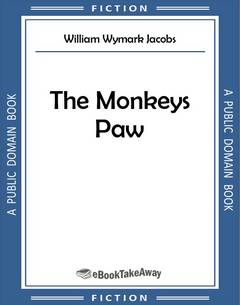 Without, the night was cold and wet, but in the small parlour of Laburnam Villa the blinds were drawn and the fire burned brightly. Father and son were at chess, the former, who possessed ideas about the game involving radical changes, putting his king into such sharp and unnecessary perils that it even provoked comment from the white-haired old lady knitting placidly by the fire.

"Hark at the wind," said Mr. White, who, having seen a fatal mistake after it was too late, was amiably desirous of preventing his son from seeing it.

"I'm listening," said the latter, grimly surveying the board as he stretched out his hand. "Check."

"I should hardly think that he'd come to-night," said his father, with his hand poised over the board.

"That's the worst of living so far out," bawled Mr. White, with sudden and unlooked-for violence; "of all the beastly, slushy, out-of-the-way places to live in, this is the worst. Pathway's a bog, and the road's a torrent. I don't know what people are thinking about. I suppose because only two houses in the road are let, they think it doesn't matter."

"Never mind, dear," said his wife, soothingly; "perhaps you'll win the next one."

Mr. White looked up sharply, just in time to intercept a knowing glance between mother and son. The words died away on his lips, and he hid a guilty grin in his thin grey beard.

"There he is," said Herbert White, as the gate banged to loudly and heavy footsteps came toward the door.

The old man rose with hospitable haste, and opening the door, was heard condoling with the new arrival. The new arrival also condoled with himself, so that Mrs. White said, "Tut, tut!" and coughed gently as her husband entered the room, followed by a tall, burly man, beady of eye and rubicund of visage.

"Sergeant-Major Morris," he said, introducing him.

The sergeant-major shook hands, and taking the proffered seat by the fire, watched contentedly while his host got out whiskey and tumblers and stood a small copper kettle on the fire.

At the third glass his eyes got brighter, and he began to talk, the little family circle regarding with eager interest this visitor from distant parts, as he squared his broad shoulders in the chair and spoke of wild scenes and doughty deeds; of wars and plagues and strange peoples.

"Twenty-one years of it," said Mr. White, nodding at his wife and son. "When he went away he was a slip of a youth in the warehouse. Now look at him."

"He don't look to have taken much harm," said Mrs. White, politely.

"Better where you are," said the sergeant-major, shaking his head. He put down the empty glass, and sighing softly, shook it again.

"I should like to see those old temples and fakirs and jugglers," said the old man. "What was that you started telling me the other day about a monkey's paw or something, Morris?"

"Nothing," said the soldier, hastily. "Leastways nothing worth hearing."

"Well, it's just a bit of what you might call magic, perhaps," said the sergeant-major, offhandedly.

His three listeners leaned forward eagerly. The visitor absent-mindedly put his empty glass to his lips and then set it down again. His host filled it for him.

"To look at," said the sergeant-major, fumbling in his pocket, "it's just an ordinary little paw, dried to a mummy."

He took something out of his pocket and proffered it. Mrs. White drew back with a grimace, but her son, taking it, examined it curiously.

"And what is there special about it?" inquired Mr. White as he took it from his son, and having examined it, placed it upon the table.

"It had a spell put on it by an old fakir," said the sergeant-major, "a very holy man. He wanted to show that fate ruled people's lives, and that those who interfered with it did so to their sorrow. He put a spell on it so that three separate men could each have three wishes from it."

His manner was so impressive that his hearers were conscious that their light laughter jarred somewhat.

The soldier regarded him in the way that middle age is wont to regard presumptuous youth. "I have," he said, quietly, and his blotchy face whitened.

"And did you really have the three wishes granted?" asked Mrs. White.

"I did," said the sergeant-major, and his glass tapped against his strong teeth.

"And has anybody else wished?" persisted the old lady.

"The first man had his three wishes. Yes," was the reply; "I don't know what the first two were, but the third was for death. That's how I got the paw."

His tones were so grave that a hush fell upon the group.

"If you've had your three wishes, it's no good to you now, then, Morris," said the old man at last. "What do you keep it for?"

The soldier shook his head. "Fancy, I suppose," he said, slowly. "I did have some idea of selling it, but I don't think I will. It has caused enough mischief already. Besides, people won't buy. They think it's a fairy tale; some of them, and those who do think anything of it want to try it first and pay me afterward."

"If you could have another three wishes," said the old man, eyeing him keenly, "would you have them?"

He took the paw, and dangling it between his forefinger and thumb, suddenly threw it upon the fire. White, with a slight cry, stooped down and snatched it off.

"I won't," said his friend, doggedly. "I threw it on the fire. If you keep it, don't blame me for what happens. Pitch it on the fire again like a sensible man."

The other shook his head and examined his new possession closely. "How do you do it?" he inquired.

"Hold it up in your right hand and wish aloud," said the sergeant-major, "but I warn you of the consequences."

"Sounds like the Arabian Nights," said Mrs. White, as she rose and began to set the supper. "Don't you think you might wish for four pairs of hands for me?"

Her husband drew the talisman from pocket, and then all three burst into laughter as the sergeant-major, with a look of alarm on his face, caught him by the arm.