The Man with the Clubfoot 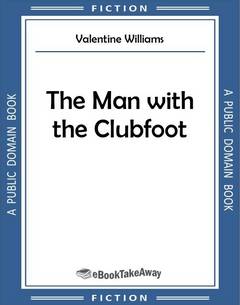 Download The Man with the Clubfoot by Valentine Williams for iPhone, iPad, Nook, Android, and Kindle in PDF and all popular eBook reader formats (AZW3, EPUB, MOBI).

I SEEK A BED IN ROTTERDAM

The reception clerk looked up from the hotel register and shook his head firmly. "Very sorry, saire," he said, "not a bed in ze house." And he closed the book with a snap.

Outside the rain came down heavens hard. Every one who came into the brightly lit hotel vestibule entered with a gush of water. I felt I would rather die than face the wind-swept streets of Rotterdam again.

I turned once more to the clerk who was now busy at the key-rack.

"Haven't you really a corner? I wouldn't mind where it was, as it is only for the night. Come now..."

"Very sorry, saire. We have two gentlemen sleeping in ze bathrooms already. If you had reserved..." And he shrugged his shoulders and bent towards a visitor who was demanding his key.

I turned away with rage in my heart. What a cursed fool I had been not to wire from Groningen! I had fully intended to, but the extraordinary conversation I had had with Dicky Allerton had put everything else out of my head. At every hotel I had tried it had been the same story—Cooman's, the Maas, the Grand, all were full even to the bathrooms. If I had only wired....

As I passed out into the porch I bethought myself of the porter. A hotel porter had helped me out of a similar plight in Breslau once years ago. This porter, with his red, drink-sodden face and tarnished gold braid, did not promise well, so far as a recommendation for a lodging for the night was concerned. Still...

I suppose it was my mind dwelling on my experience at Breslau that made me address the man in German. When one has been familiar with a foreign tongue from one's boyhood, it requires but a very slight mental impulse to drop into it. From such slight beginnings do great enterprises spring. If I had known the immense ramification of adventure that was to spread its roots from that simple question, I verily believe my heart would have failed me and I would have run forth into the night and the rain and roamed the streets till morning.

Well, I found myself asking the man in German if he knew where I could get a room for the night.

He shot a quick glance at me from under his reddened eyelids.

"The gentleman would doubtless like a German house?" he queried.

You may hardly credit it, but my interview with Dicky Allerton that afternoon had simply driven the war out of my mind. When one has lived much among foreign peoples, one's mentality slips automatically into their skin. I was now thinking in German—at least so it seems to me when I look back upon that night—and I answered without reflecting.

"I don't care where it is as long as I can get somewhere to sleep out of this infernal rain!"

"The gentleman can have a good, clean bed at the Hotel Sixt in the little street they call the Vos in't Tuintje, on the canal behind the Bourse. The proprietress is a good German, jawohl ... Frau Anna Schratt her name is. The gentleman need only say he comes from Franz at the Bopparder Hof."

I gave the man a gulden and bade him get me a cab.

It was still pouring. As we rattled away over the glistening cobble-stones, my mind travelled back over the startling events of the day. My talk with old Dicky had given me such a mental jar that I found it at first wellnigh impossible to concentrate my thoughts. That's the worst of shell-shock. You think you are cured, you feel fit and well, and then suddenly the machinery of your mind checks and halts and creaks. Ever since I had left hospital convalescent after being wounded on the Somme ("gunshot wound in head and cerebral concussion" the doctors called it), I had trained myself, whenever my brain was en panne, to go back to the beginning of things and work slowly up to the present by methodical stages.

Let's see then—I was "boarded" at Millbank and got three months' leave; then I did a month in the Little Johns' bungalow in Cornwall. There I got the letter from Dicky Allerton, who, before the war, had been in partnership with my brother Francis in the motor business at Coventry. Dicky had been with the Naval Division at Antwerp and was interned with the rest of the crowd when they crossed the Dutch frontier in those disastrous days of October, 1914.

Dicky wrote from Groningen, just a line. Now that I was on leave, if I were fit to travel, would I come to Groningen and see him? "I have had a curious communication which seems to have to do with poor Francis," he added. That was all.

My brain was still halting, so I turned to Francis. Here again I had to go back. Francis, rejected on all sides for active service, owing to what he scornfully used to call "the shirkers' ailment, varicose veins," had flatly declined to carry on with his motor business after Dicky had joined up, although their firm was doing government work. Finally, he had vanished into the maw of the War Office and all I knew was that he was "something on the Intelligence." More than this not even he would tell me, and when he finally disappeared from London, just about the time that I was popping the parapet with my battalion at Neuve Chapelle, he left me his London chambers as his only address for letters.

Ah! now it was all coming back—Francis' infrequent letters to me about nothing at all, then his will, forwarded to me for safe keeping when I was home on leave last Christmas, and after that, silence. Not another letter, not a word about him, not a shred of information. He had utterly vanished.

I remembered my frantic inquiries, my vain visits to the War Office, my perplexity at the imperturbable silence of the various officials I importuned for news of my poor brother. Then there was that lunch at the Bath Club with Sonny Martin of the Heavies and a friend of his, some kind of staff captain in red tabs. I don't think I heard his name, but I know he was at the War Office, and presently over our cigars and coffee I laid before him the mysterious facts about my brother's case.