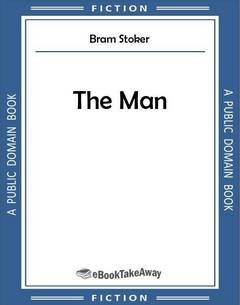 Read an excerpt and download The Man by Bram Stoker for iPhone, iPad, Nook, Android, and Kindle in PDF and all popular eBook reader formats (AZW3, EPUB, MOBI).

‘I would rather be an angel than God!’

The voice of the speaker sounded clearly through the hawthorn tree.  The young man and the young girl who sat together on the low tombstone looked at each other.  They had heard the voices of the two children talking, but had not noticed what they said; it was the sentiment, not the sound, which roused their attention.

The girl put her finger to her lips to impress silence, and the man nodded; they sat as still as mice whilst the two children went on talking.

The scene would have gladdened a painter’s heart.  An old churchyard.  The church low and square-towered, with long mullioned windows, the yellow-grey stone roughened by age and tender-hued with lichens.  Round it clustered many tombstones tilted in all directions.  Behind the church a line of gnarled and twisted yews.

The churchyard was full of fine trees.  On one side a magnificent cedar; on the other a great copper beech.  Here and there among the tombs and headstones many beautiful blossoming trees rose from the long green grass.  The laburnum glowed in the June afternoon sunlight; the lilac, the hawthorn and the clustering meadowsweet which fringed the edge of the lazy stream mingled their heavy sweetness in sleepy fragrance.  The yellow-grey crumbling walls were green in places with wrinkled harts-tongues, and were topped with sweet-williams and spreading house-leek and stone-crop and wild-flowers whose delicious sweetness made for the drowsy repose of perfect summer.

But amid all that mass of glowing colour the two young figures seated on the grey old tomb stood out conspicuously.  The man was in conventional hunting-dress: red coat, white stock, black hat, white breeches, and top-boots.  The girl was one of the richest, most glowing, and yet withal daintiest figures the eye of man could linger on.  She was in riding-habit of hunting scarlet cloth; her black hat was tipped forward by piled-up masses red-golden hair.  Round her neck was a white lawn scarf in the fashion of a man’s hunting-stock, close fitting, and sinking into a gold-buttoned waistcoat of snowy twill.  As she sat with the long skirt across her left arm her tiny black top-boots appeared underneath.  Her gauntleted gloves were of white buckskin; her riding-whip was plaited of white leather, topped with ivory and banded with gold.