The King of the Mountains 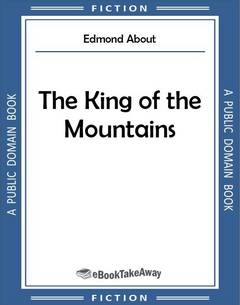 Download The King of the Mountains by Edmond About for iPhone, iPad, Nook, Android, and Kindle in PDF and all popular eBook reader formats (AZW3, EPUB, MOBI).

On the 3d of July, about six o'clock in the morning, I was watering my flowers. A young man entered the garden. He was blonde, beardless; he wore a German cap and sported gold spectacles. A long, loose woolen coat, or paletot, drooped in a melancholy way around his form, like a sail around a mast in a calm. He wore no gloves; his tan leather shoes had such large soles, that the foot was surrounded by a narrow flange. In the breast-pocket of his paletot, a huge porcelain pipe bulged half-way out. I did not stop to ask myself whether this young man was a student in the German Universities; I put down my watering-pot, and saluted him with: "Guten Morgen!"

"Monsieur," he said to me in French, but with a deplorable accent, "my name is Hermann Schultz; I have come to pass some months in Greece, and I have carried your book with me everywhere."

This praise penetrated my heart with sweet joy; the stranger's voice seemed more melodious than Mozart's music, and I directed toward his gold glasses a swift look of gratitude. You would scarcely believe, dear reader, how much we love those who have taken the trouble to decipher our jargon. As for me, if I have ever sighed to be rich, it is in order to assure an income to all those who have read my works.

I took him by the hand, this excellent young man. I seated him beside me on the garden-bench. He told me that he was a botanist, that he had a commission from the "Jardin des Plantes" in Hamburg. In order to complete his herbarium he was studying the country, the animals, and the people. His naive descriptions, his terse but just decisions, recalled to me, a little, the simple old Herodotus. He expressed himself awkwardly, but with a candor which inspired confidence; he emphasized his words with the tone of a man entirely convinced. He questioned me, if not of every one in Athens, at least of all the principal personages in my book. In the course of the conversation, he made some statements on general subjects, which seemed to me far more reasonable than any which I had advanced. At the end of an hour we had become good friends.

I do not know which of us first spoke of brigandage. People who travel in Italy talk of paintings; those who visit England talk of manufactures; each country has its specialty.

"My dear sir," I asked of my guest, "have you met any brigands? Is it true, as is reported, that there are still bandits in Greece?"

"It is only too true," he gravely replied. "I was for fifteen days in the hands of the terrible Hadgi-Stavros, nicknamed The King of the Mountains. I speak then from experience. If you have leisure, and a long story will not weary you, I am ready to give you the details of my adventure. You may make of it what you please; a romance, a novel, or perhaps an additional chapter in the little book in which you have written so many curious facts."

"You are very good," I replied, "and I am at your disposal. Let us go to my study. It is cooler there than in the garden and yet we can enjoy the odor of the sweet-peas and mignonette."

He followed me, humming to himself in Greek, a popular song:

"A robber with black eyes descends to the plains; His gun is heard at each step; He says to the vultures: 'Do not leave me, I will serve to you the Pasha of Athens.'"

He seated himself on a divan, with his legs crossed under him like the Arabian story-tellers, took off his loose paletot, lighted his pipe and began his tale. I seated myself at my desk and took stenographic notes as he dictated.

I have always been without much distrust, especially with those who have complimented me. Sometimes the amiable stranger told me such surprising things that I asked myself many times if he was not mocking me. But his manner was so simple, his blue eyes so limpid, that my suspicions faded away on the instant.

He talked steadily, until half after noon. He stopped two or three times only long enough to relight his pipe.

He smoked with regular puffs like the smoke stack of a steam-engine. Each time I raised my eyes, I beheld him, calm, smiling, in the midst of a thick cloud of smoke, like Jupiter in the 5th act of Amphitryon.

We were interrupted by a servant with the announcement that breakfast was served. Hermann seated himself opposite me, and my trifling suspicions vanished before his appetite. I said to myself that a good digestion rarely accompanies a bad conscience. The young German was too good an eater to be an untruthful narrator, and his veracity restored my faith in his veracity. Struck with this idea, I confessed, while offering him some strawberries, that I had, for an instant, doubted him. He replied with an angelic smile.

I passed the entire day with my new friend, and I found that the time did not drag. At five o'clock, he knocked the ashes from his pipe, put on his outer coat, and shaking my hand, said: "Adieu." I replied: "Au revoir."

"No," he said, shaking his head; "I leave to-night at seven o'clock, and I dare not hope ever to see you again."

"Leave your address. I have not yet renounced the pleasure of traveling, and I may, sometime, pass through Hamburg."

"Unfortunately, I do not know where I shall pitch my tent. Germany is large; I may not remain a citizen of Hamburg."

"But if I publish your story, at least I ought to send you a copy."

"Do not take that trouble. As soon as the book is published, it will appear in Leipzig and I will read it. Adieu!"

After his departure, I re-read attentively what I had written. I found some remarkable details, but nothing which contradicts what I had seen and heard during my stay in Greece.

At the moment of finishing the manuscript, a scruple restrained me: What if some errors had crept into Hermann's statements? In my quality of editor was I not responsible? To publish the story of "The King of the Mountains," was it not to expose myself to editorial comments and criticisms?

In my perplexity, I thought of making a copy of the original. I sent the first to M. Pseftis. I begged him to point out, candidly, all the errors, and I promised to print his reply at the end of the volume.

I re-read the copy which I had retained. I changed no word in it. If I made myself the corrector of the young German's statements, I would become his collaborator. So I discreetly withdrew. It is Hermann who speaks to you.