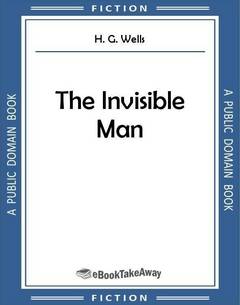 With his face swaddled in bandages, his eyes hidden behind dark glasses, and his hands covered even indoors, Griffin—the new guest at the Coach and Horses—is at first assumed to be a shy accident victim.

But the true reason for his disguise is far more chilling: he has developed a process that has made him invisible and is locked in a struggle to discover the antidote. Forced from the village and driven to murder, he seeks the aid of an old friend, Kemp.

The horror of his fate has affected his mind, however, and when Kemp refuses to help, he resolves to wreak his revenge.

The stranger came early in February, one wintry day, through a biting wind and a driving snow, the last snowfall of the year, over the down, walking from Bramblehurst railway station, and carrying a little black portmanteau in his thickly gloved hand. He was wrapped up from head to foot, and the brim of his soft felt hat hid every inch of his face but the shiny tip of his nose; the snow had piled itself against his shoulders and chest, and added a white crest to the burden he carried. He staggered into the "Coach and Horses" more dead than alive, and flung his portmanteau down. "A fire," he cried, "in the name of human charity! A room and a fire!" He stamped and shook the snow from off himself in the bar, and followed Mrs. Hall into her guest parlour to strike his bargain. And with that much introduction, that and a couple of sovereigns flung upon the table, he took up his quarters in the inn.

Mrs. Hall lit the fire and left him there while she went to prepare him a meal with her own hands. A guest to stop at Iping in the wintertime was an unheard-of piece of luck, let alone a guest who was no "haggler," and she was resolved to show herself worthy of her good fortune. As soon as the bacon was well under way, and Millie, her lymphatic maid, had been brisked up a bit by a few deftly chosen expressions of contempt, she carried the cloth, plates, and glasses into the parlour and began to lay them with the utmost éclat. Although the fire was burning up briskly, she was surprised to see that her visitor still wore his hat and coat, standing with his back to her and staring out of the window at the falling snow in the yard. His gloved hands were clasped behind him, and he seemed to be lost in thought. She noticed that the melting snow that still sprinkled his shoulders dripped upon her carpet. "Can I take your hat and coat, sir?" she said, "and give them a good dry in the kitchen?"

"No," he said without turning.

She was not sure she had heard him, and was about to repeat her question.

He turned his head and looked at her over his shoulder. "I prefer to keep them on," he said with emphasis, and she noticed that he wore big blue spectacles with sidelights, and had a bush side-whisker over his coat-collar that completely hid his cheeks and face.

He made no answer, and had turned his face away from her again, and Mrs. Hall, feeling that her conversational advances were ill-timed, laid the rest of the table things in a quick staccato and whisked out of the room. When she returned he was still standing there, like a man of stone, his back hunched, his collar turned up, his dripping hat-brim turned down, hiding his face and ears completely. She put down the eggs and bacon with considerable emphasis, and called rather than said to him, "Your lunch is served, sir."

"Thank you," he said at the same time, and did not stir until she was closing the door. Then he swung round and approached the table with a certain eager quickness.