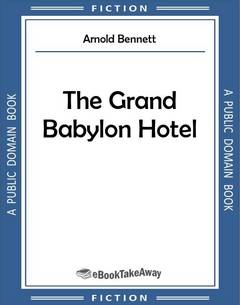 Chapter One THE MILLIONAIRE AND THE WAITER

Jules, the celebrated head waiter of the Grand Babylon, was bending formally towards the alert, middle-aged man who had just entered the smoking-room and dropped into a basket-chair in the corner by the conservatory. It was 7.45 on a particularly sultry June night, and dinner was about to be served at the Grand Babylon. Men of all sizes, ages, and nationalities, but every one alike arrayed in faultless evening dress, were dotted about the large, dim apartment. A faint odour of flowers came from the conservatory, and the tinkle of a fountain. The waiters, commanded by Jules, moved softly across the thick Oriental rugs, balancing their trays with the dexterity of jugglers, and receiving and executing orders with that air of profound importance of which only really first-class waiters have the secret. The atmosphere was an atmosphere of serenity and repose, characteristic of the Grand Babylon. It seemed impossible that anything could occur to mar the peaceful, aristocratic monotony of existence in that perfectly-managed establishment. Yet on that night was to happen the mightiest upheaval that the Grand Babylon had ever known.

'Yes, sir?' repeated Jules, and this time there was a shade of august disapproval in his voice: it was not usual for him to have to address a customer twice.

'Oh!' said the alert, middle-aged man, looking up at length. Beautifully ignorant of the identity of the great Jules, he allowed his grey eyes to twinkle as he caught sight of the expression on the waiter's face. 'Bring me an Angel Kiss.'

'Bring me an Angel Kiss, and be good enough to lose no time.'

'If it's an American drink, I fear we don't keep it, sir.' The voice of Jules fell icily distinct, and several men glanced round uneasily, as if to deprecate the slightest disturbance of their calm. The appearance of the person to whom Jules was speaking, however, reassured them somewhat, for he had all the look of that expert, the travelled Englishman, who can differentiate between one hôtel and another by instinct, and who knows at once where he may make a fuss with propriety, and where it is advisable to behave exactly as at the club. The Grand Babylon was a hôtel in whose smoking-room one behaved as though one was at one's club.

'I didn't suppose you did keep it, but you can mix it, I guess, even in this hôtel.'

'This isn't an American hôtel, sir.' The calculated insolence of the words was cleverly masked beneath an accent of humble submission.

The alert, middle-aged man sat up straight, and gazed placidly at Jules, who was pulling his famous red side-whiskers.

'Get a liqueur glass,' he said, half curtly and half with good-humoured tolerance, 'pour into it equal quantities of maraschino, cream, and crême de menthe. Don't stir it; don't shake it. Bring it to me. And, I say, tell the bar-tender—'

'Tell the bar-tender to make a note of the recipe, as I shall probably want an Angel Kiss every evening before dinner so long as this weather lasts.'

'I will send the drink to you, sir,' said Jules distantly. That was his parting shot, by which he indicated that he was not as other waiters are, and that any person who treated him with disrespect did so at his own peril.

A few minutes later, while the alert, middle-aged man was tasting the Angel Kiss, Jules sat in conclave with Miss Spencer, who had charge of the bureau of the Grand Babylon. This bureau was a fairly large chamber, with two sliding glass partitions which overlooked the entrance-hall and the smoking-room. Only a small portion of the clerical work of the great hôtel was performed there. The place served chiefly as the lair of Miss Spencer, who was as well known and as important as Jules himself. Most modern hôtels have a male clerk to superintend the bureau. But the Grand Babylon went its own way. Miss Spencer had been bureau clerk almost since the Grand Babylon had first raised its massive chimneys to heaven, and she remained in her place despite the vagaries of other hôtels. Always admirably dressed in plain black silk, with a small diamond brooch, immaculate wrist-bands, and frizzed yellow hair, she looked now just as she had looked an indefinite number of years ago. Her age—none knew it, save herself and perhaps one other, and none cared. The gracious and alluring contours of her figure were irreproachable; and in the evenings she was a useful ornament of which any hôtel might be innocently proud. Her knowledge of Bradshaw, of steamship services, and the programmes of theatres and music-halls was unrivalled; yet she never travelled, she never went to a theatre or a music-hall. She seemed to spend the whole of her life in that official lair of hers, imparting information to guests, telephoning to the various departments, or engaged in intimate conversations with her special friends on the staff, as at present.

'I thought he must be a New Yorker,' said Jules, after a brief, significant pause, 'but he talks as good English as you or me. Says he wants an "Angel Kiss"—maraschino and cream, if you please—every night. I'll see he doesn't stop here too long.'

Miss Spencer smiled grimly in response. The notion of referring to Theodore Racksole as a 'New Yorker' appealed to her sense of humour, a sense in which she was not entirely deficient. She knew, of course, and she knew that Jules knew, that this Theodore Racksole must be the unique and only Theodore Racksole, the third richest man in the United States, and therefore probably in the world. Nevertheless she ranged herself at once on the side of Jules.

Just as there was only one Racksole, so there was only one Jules, and Miss Spencer instinctively shared the latter's indignation at the spectacle of any person whatsoever, millionaire or Emperor, presuming to demand an 'Angel Kiss', that unrespectable concoction of maraschino and cream, within the precincts of the Grand Babylon. In the world of hôtels it was currently stated that, next to the proprietor, there were three gods at the Grand Babylon—Jules, the head waiter, Miss Spencer, and, most powerful of all, Rocco, the renowned chef, who earned two thousand a year, and had a chalet on the Lake of Lucerne. All the great hôtels in Northumberland Avenue and on the Thames Embankment had tried to get Rocco away from the Grand Babylon, but without success. Rocco was well aware that even he could rise no higher than the maître hôtel of the Grand Babylon, which, though it never advertised itself, and didn't belong to a limited company, stood an easy first among the hôtels of Europe—first in expensiveness, first in exclusiveness, first in that mysterious quality known as 'style'.

Situated on the Embankment, the Grand Babylon, despite its noble proportions, was somewhat dwarfed by several colossal neighbours. It had but three hundred and fifty rooms, whereas there are two hôtels within a quarter of a mile with six hundred and four hundred rooms respectively. On the other hand, the Grand Babylon was the only hôtel in London with a genuine separate entrance for Royal visitors constantly in use. The Grand Babylon counted that day wasted on which it did not entertain, at the lowest, a German prince or the Maharajah of some Indian State. When Felix Babylon—after whom, and not with any reference to London's nickname, the hôtel was christened—when Felix Babylon founded the hôtel in 1869 he had set himself to cater for Royalty, and that was the secret of his triumphant eminence.

The son of a rich Swiss hôtel proprietor and financier, he had contrived to established a connection with the officials of several European Courts, and he had not spared money in that respect. Sundry kings and not a few princesses called him Felix, and spoke familiarly of the hôtel as 'Felix's'; and Felix had found that this was very good for trade. The Grand Babylon was managed accordingly. The 'note' of its policy was discretion, always discretion, and quietude, simplicity, remoteness. The place was like a palace incognito. There was no gold sign over the roof, not even an explanatory word at the entrance. You walked down a small side street off the Strand, you saw a plain brown building in front of you, with two mahogany swing doors, and an official behind each; the doors opened noiselessly; you entered; you were in Felix's. If you meant to be a guest, you, or your courier, gave your card to Miss Spencer. Upon no consideration did you ask for the tariff. It was not good form to mention prices at the Grand Babylon; the prices were enormous, but you never mentioned them. At the conclusion of your stay a bill was presented, brief and void of dry details, and you paid it without a word. You met with a stately civility, that was all. No one had originally asked you to come; no one expressed the hope that you would come again. The Grand Babylon was far above such manoeuvres; it defied competition by ignoring it; and consequently was nearly always full during the season.