The Gifts of Asti 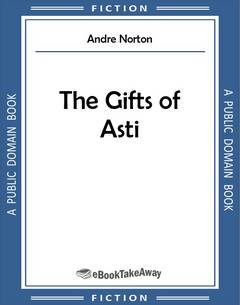 Download The Gifts of Asti by Andre Norton for iPhone, iPad, Nook, Android, and Kindle in PDF and all popular eBook reader formats (AZW3, EPUB, MOBI).

She was the guardian of the worlds, but HER world was dead.

Even here, on the black terrace before the forgotten mountain retreat of Asti, it was possible to smell the dank stench of burning Memphir, to imagine that the dawn wind bore upward from the pillaged city the faint tortured cries of those whom the barbarians of Klem hunted to their prolonged death. Indeed it was time to leave—

Varta, last of the virgin Maidens of Asti, shivered. The scaled and wattled creature who crouched beside her thigh turned his reptilian head so that golden eyes met the aquamarine ones set slantingly at a faintly provocative angle in her smooth ivory face.

She nodded in answer to that unvoiced question Lur had sent into her brain, and turned toward the dark cavern which was the mouth of Asti's last dwelling place. Once, more than a thousand years before when the walls of Memphir were young, Asti had lived among men below. But in the richness and softness which was trading Memphir, empire of empires, Asti found no place. So He and those who served Him had withdrawn to this mountain outcrop. And she, Varta, was the last, the very last to bow knee at Asti's shrine and raise her voice in the dawn hymn—for Lur, as were all his race, was mute.

Even the loot of Memphir would not sate the shaggy headed warriors who had stormed her gates this day. The stairway to Asti's Temple was plain enough to see and there would be those to essay the steep climb hoping to find a treasure which did not exist. For Asti was an austere God, delighting in plain walls and bare altars. His last priest had lain in the grave niches these three years, there would be none to hold that gate against intruders.

Varta passed between tall, uncarved pillars, Lur padding beside her, his spine mane erect, the talons on his forefeet clicking on the stone in steady rhythm. So they came into the innermost shrine of Asti and there Varta made graceful obeisance to the great cowled and robed figure which sat enthroned, its hidden eyes focused upon its own outstretched hand.

And above the flattened palm of that wide hand hung suspended in space the round orange-red sun ball which was twin to the sun that lighted Erb. Around the miniature sun swung in their orbits the four worlds of the system, each obeying the laws of space, even as did the planets they represented.

"Memphir has fallen," Varta's voice sounded rusty in her own ears. She had spoken so seldom during the last lonely months. "Evil has risen to overwhelm our world, even as it was prophesied in Your Revelations, O, Ruler of Worlds and Maker of Destiny. Therefore, obeying the order given of old, I would depart from this, Thy house. Suffer me now to fulfill the Law—"

Three times she prostrated her slim body on the stones at the foot of Asti's judgment chair. Then she arose and, with the confidence of a child in its father, she laid her hand palm upward upon the outstretched hand of Asti. Beneath her flesh the stone was not cold and hard, but seemed to have an inner heat, even as might a human hand. For a long moment she stood so and then she raised her hand slowly, carefully, as if within its slight hollow she cupped something precious.