The Fruit of the Tree 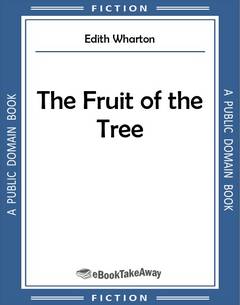 Read an excerpt and download The Fruit of the Tree by Edith Wharton for iPhone, iPad, Nook, Android, and Kindle in PDF and all popular eBook reader formats (AZW3, EPUB, MOBI).

John Amherst, an idealistic middle manager in a New England textile mill, is committed to improving the deplorable working conditions of the laborers in his charge. But upper management, whose only concern is maximizing profits, frustrates his efforts. When Amherst eventually marries Bessy Westmore, the widow of the former mill owner, he is able at last to initiate an ambitious project of reform. But happiness for John and Bessy proves to be short-lived.

FRUIT OF THE TREE

In the surgical ward of the Hope Hospital at Hanaford, a nurse was bending over a young man whose bandaged right hand and arm lay stretched along the bed.

His head stirred uneasily, and slipping her arm behind him she effected a professional readjustment of the pillows. "Is that better?"

As she leaned over, he lifted his anxious bewildered eyes, deep-sunk under ridges of suffering. "I don't s'pose there's any kind of a show for me, is there?" he asked, pointing with his free hand—the stained seamed hand of the mechanic—to the inert bundle on the quilt.

Her only immediate answer was to wipe the dampness from his forehead; then she said: "We'll talk about that to-morrow."

"Because Dr. Disbrow can't tell till the inflammation goes down."

"Will it go down by to-morrow?"

"It will begin to, if you don't excite yourself and keep up the fever."[p 4]

"Well, then there are four reasons for keeping quiet," she rejoined.

She did not use, in speaking, the soothing inflection of her trade: she seemed to disdain to cajole or trick the sufferer. Her full young voice kept its cool note of authority, her sympathy revealing itself only in the expert touch of her hands and the constant vigilance of her dark steady eyes. This vigilance softened to pity as the patient turned his head away with a groan. His free left hand continued to travel the sheet, clasping and unclasping itself in contortions of feverish unrest. It was as though all the anguish of his mutilation found expression in that lonely hand, left without work in the world now that its mate was useless.

The nurse felt a touch on her shoulder, and rose to face the matron, a sharp-featured woman with a soft intonation.

"This is Mr. Amherst, Miss Brent. The assistant manager from the mills. He wishes to see Dillon."

John Amherst's step was singularly noiseless. The nurse, sensitive by nature and training to all physical characteristics, was struck at once by the contrast between his alert face and figure and the silent way in which he moved. She noticed, too, that the same contrast was repeated in the face itself, its spare energetic[p 5] outline, with the high nose and compressed lips of the mover of men, being curiously modified by the veiled inward gaze of the grey eyes he turned on her. It was one of the interests of Justine Brent's crowded yet lonely life to attempt a rapid mental classification of the persons she met; but the contradictions in Amherst's face baffled her, and she murmured inwardly "I don't know" as she drew aside to let him approach the bed. He stood by her in silence, his hands clasped behind him, his eyes on the injured man, who lay motionless, as if sunk in a lethargy. The matron, at the call of another nurse, had minced away down the ward, committing Amherst with a glance to Miss Brent; and the two remained alone by the bed.