The Evolution of Modern Medicine 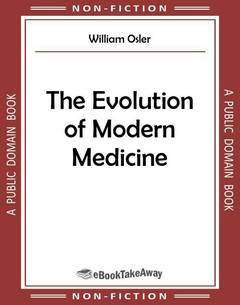 SAIL to the Pacific with some Ancient Mariner, and traverse day by day that silent sea until you reach a region never before furrowed by keel where a tiny island, a mere speck on the vast ocean, has just risen from the depths, a little coral reef capped with green, an atoll, a mimic earth, fringed with life, built up through countless ages by life on the remains of life that has passed away. And now, with wings of fancy, join Ianthe in the magic car of Shelley, pass the eternal gates of the flaming ramparts of the world and see his vision:

And somewhere, "as fast and far the chariot flew," amid the mighty globes would be seen a tiny speck, "earth's distant orb," one of "the smallest lights that twinkle in the heavens." Alighting, Ianthe would find something she had probably not seen elsewhere in her magic flight—life, everywhere encircling the sphere. And as the little coral reef out of a vast depth had been built up by generations of polyzoa, so she would see that on the earth, through illimitable ages, successive generations of animals and plants had left in stone their imperishable records: and at the top of the series she would meet the thinking, breathing creature known as man. Infinitely little as is the architect of the atoll in proportion to the earth on which it rests, the polyzoon, I doubt not, is much larger relatively than is man in proportion to the vast systems of the Universe, in which he represents an ultra-microscopic atom less ten thousand times than the tiniest of the "gay motes that people the sunbeams." Yet, with colossal audacity, this thinking atom regards himself as the anthropocentric pivot around which revolve the eternal purposes of the Universe. Knowing not whence he came, why he is here, or whither he is going, man feels himself of supreme importance, and certainly is of interest—to himself. Let us hope that he has indeed a potency and importance out of all proportion to his somatic insignificance. We know of toxins of such strength that an amount too infinitesimal to be gauged may kill; and we know that "the unit adopted in certain scientific work is the amount of emanation produced by one million-millionth of a grain of radium, a quantity which itself has a volume of less than a million-millionth of a cubic millimetre and weighs a million million times less than an exceptionally delicate chemical balance will turn to" (Soddy, 1912). May not man be the radium of the Universe? At any rate let us not worry about his size. For us he is a very potent creature, full of interest, whose mundane story we are only beginning to unravel.

Civilization is but a filmy fringe on the history of man. Go back as far as his records carry us and the story written on stone is of yesterday in comparison with the vast epochs of time which modern studies demand for his life on the earth. For two millions (some hold even three millions) of years man lived and moved and had his being in a world very different from that upon which we look out. There appear, indeed, to have been various types of man, some as different from us as we are from the anthropoid apes. What upstarts of yesterday are the Pharaohs in comparison with the men who survived the tragedy of the glacial period! The ancient history of man—only now beginning to be studied—dates from the Pliocene or Miocene period; the modern history, as we know it, embraces that brief space of time that has elapsed since the earliest Egyptian and Babylonian records were made. This has to be borne in mind in connection with the present mental status of man, particularly in his outlook upon nature. In his thoughts and in his attributes, mankind at large is controlled by inherited beliefs and impulses, which countless thousands of years have ingrained like instinct. Over vast regions of the earth today, magic, amulets, charms, incantations are the chief weapons of defense against a malignant nature; and in disease, the practice of Asa(*) is comparatively novel and unusual; in days of illness many millions more still seek their gods rather than the physicians. In an upward path man has had to work out for himself a relationship with his fellows and with nature. He sought in the supernatural an explanation of the pressing phenomena of life, peopling the world with spiritual beings, deifying objects of nature, and assigning to them benign or malign influences, which might be invoked or propitiated. Primitive priest, physician and philosopher were one, and struggled, on the one hand, for the recognition of certain practices forced on him by experience, and on the other, for the recognition of mystical agencies which control the dark, "uncharted region" about him—to use Prof. Gilbert Murray's phrase—and were responsible for everything he could not understand, and particularly for the mysteries of disease. Pliny remarks that physic "was early fathered upon the gods"; and to the ordinary non-medical mind, there is still something mysterious about sickness, something outside the ordinary standard.