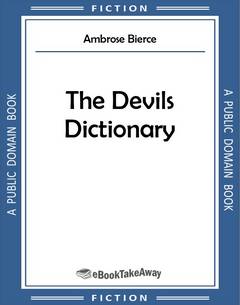 Read an excerpt and download The Devils Dictionary by Ambrose Bierce for iPhone, iPad, Nook, Android, and Kindle in PDF and all popular eBook reader formats (AZW3, EPUB, MOBI).

ABASEMENT, n. A decent and customary mental attitude in the presence of wealth or power. Peculiarly appropriate in an employee when addressing an employer.

ABATIS, n. Rubbish in front of a fort, to prevent the rubbish outside from molesting the rubbish inside.

ABDICATION, n. An act whereby a sovereign attests his sense of the high temperature of the throne.

ABDOMEN, n. The temple of the god Stomach, in whose worship, with sacrificial rights, all true men engage. From women this ancient faith commands but a stammering assent. They sometimes minister at the altar in a half-hearted and ineffective way, but true reverence for the one deity that men really adore they know not. If woman had a free hand in the world's marketing the race would become graminivorous.

ABILITY, n. The natural equipment to accomplish some small part of the meaner ambitions distinguishing able men from dead ones. In the last analysis ability is commonly found to consist mainly in a high degree of solemnity. Perhaps, however, this impressive quality is rightly appraised; it is no easy task to be solemn.

ABNORMAL, adj. Not conforming to standard. In matters of thought and conduct, to be independent is to be abnormal, to be abnormal is to be detested. Wherefore the lexicographer adviseth a striving toward the straiter [sic] resemblance of the Average Man than he hath to himself. Whoso attaineth thereto shall have peace, the prospect of death and the hope of Hell.