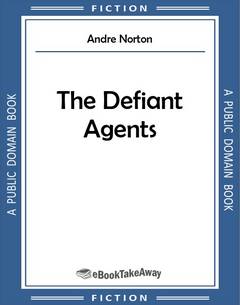 No windows broke any of the four plain walls of the office; there was no focus of outer-world sunlight on the desk there. Yet the five disks set out on its surface appeared to glow—perhaps the heat of the mischief they could cause ... had caused ... blazed in them.

But fanciful imaginings did not cushion or veil cold, hard fact. Dr. Gordon Ashe, one of the four men peering unhappily at the display, shook his head slightly as if to free his mind of such cobwebs.

His neighbor to the right, Colonel Kelgarries, leaned forward to ask harshly: "No chance of a mistake?"

"You saw the detector." The thin gray string of a man behind the desk answered with chill precision. "No, no possible mistake. These five have definitely been snooped."

"And two choices among them," Ashe murmured. That was the important point now.

"I thought these were under maximum security," Kelgarries challenged the gray man.

Florian Waldour's remote expression did not change. "Every possible precaution was in force. There was a sleeper—a hidden agent—planted——"[Pg 10]

Ashe glanced around at his three companions—Kelgarries, colonel in command of one sector of Project Star, Florian Waldour, the security head on the station, Dr. James Ruthven....

"Camdon!" he said, hardly able to believe this answer to which logic had led him.

For the first time since he had known and worked with Kelgarries Ashe saw him display open astonishment.

"Camdon? But he was sent us by—" The colonel's eyes narrowed. "He must have been sent.... There were too many cross checks to fake that!"

"Oh, he was sent, all right." For the first time there was a note of emotion in Waldour's voice. "He was a sleeper, a very deep sleeper. They must have planted him a full twenty-five or thirty years ago. He's been just what he claimed to be as long as that."

"Well, he certainly was worth their time and trouble, wasn't he?" James Ruthven's voice was a growling rumble. He sucked in thick lips, continuing to stare at the disks. "How long ago were these snooped?"

Ashe's thoughts turned swiftly from the enormity of the betrayal to that important point. The time element—that was the primary concern now that the damage was done, and they knew it.

"That's one thing we don't know." Waldour's reply came slowly as if he hated the admission.

"We'll be safer, then, if we presume the very earliest period." Ruthven's statement was as ruthless in its implications as the shock they had had when Waldour announced the disaster.[Pg 11]

But Ruthven was nodding. "Camdon was in on this from the very first. We've had the tapes in and out for study all that time, and the new detector against snooping was not put in service until two weeks ago. This case came up on the first checking round, didn't it?" he asked Waldour.

"First check," the security man agreed. "Camdon left the base six days ago. But he has been in and out on his liaison duties from the first."

"He had to go through those search points every time," Kelgarries protested. "Thought nothing could get through those." The colonel brightened. "Maybe he got his snooper films and then couldn't take them off base. Have his quarters been turned out?"

Waldour's lips lifted in a grimace of exasperation. "Please, Colonel," he said wearily, "this is not a kindergarten exercise. In confirmation of his success, listen...." He touched a button on his desk and out of the air came the emotionless chant of a newscaster.