The Custom of the Country 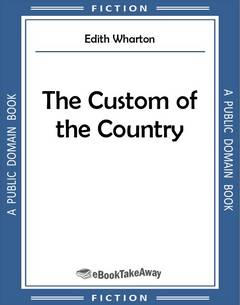 Edith Wharton’s second full-length work is a scathing yet personal examination of the exploits and follies of the modern upper class.

Through a heroine who is as vain, spoiled, and selfish as she is irresistibly fascinating, and through a most intricate and satisfying plot that follows Undine’s marriages and affairs, she conveys a vision of social behavior that is both supremely informed and supremely disenchanted.

"Undine Spragg—how can you?" her mother wailed, raising a prematurely-wrinkled hand heavy with rings to defend the note which a languid "bell-boy" had just brought in.

But her defence was as feeble as her protest, and she continued to smile on her visitor while Miss Spragg, with a turn of her quick young fingers, possessed herself of the missive and withdrew to the window to read it.

"I guess it's meant for me," she merely threw over her shoulder at her mother.

"Did you EVER, Mrs. Heeny?" Mrs. Spragg murmured with deprecating pride.

Mrs. Heeny, a stout professional-looking person in a waterproof, her rusty veil thrown back, and a shabby alligator bag at her feet, followed the mother's glance with good-humoured approval.

"I never met with a lovelier form," she agreed, answering the spirit rather than the letter of her hostess's enquiry.

Mrs. Spragg and her visitor were enthroned in two heavy gilt armchairs in one of the private drawing-rooms of the Hotel Stentorian. The Spragg rooms were known as one of the Looey suites, and the drawing-room walls, above their wainscoting of highly-varnished mahogany, were hung with salmon-pink damask and adorned with oval portraits of Marie Antoinette and the Princess de Lamballe. In the centre of the florid carpet a gilt table with a top of Mexican onyx sustained a palm in a gilt basket tied with a pink bow. But for this ornament, and a copy of "The Hound of the Baskervilles" which lay beside it, the room showed no traces of human use, and Mrs. Spragg herself wore as complete an air of detachment as if she had been a wax figure in a show-window. Her attire was fashionable enough to justify such a post, and her pale soft-cheeked face, with puffy eye-lids and drooping mouth, suggested a partially-melted wax figure which had run to double-chin.

Mrs. Heeny, in comparison, had a reassuring look of solidity and reality. The planting of her firm black bulk in its chair, and the grasp of her broad red hands on the gilt arms, bespoke an organized and self-reliant activity, accounted for by the fact that Mrs. Heeny was a "society" manicure and masseuse. Toward Mrs. Spragg and her daughter she filled the double role of manipulator and friend; and it was in the latter capacity that, her day's task ended, she had dropped in for a moment to "cheer up" the lonely ladies of the Stentorian.

The young girl whose "form" had won Mrs. Heeny's professional commendation suddenly shifted its lovely lines as she turned back from the window.

"Here—you can have it after all," she said, crumpling the note and tossing it with a contemptuous gesture into her mother's lap.