The Brother of Daphne 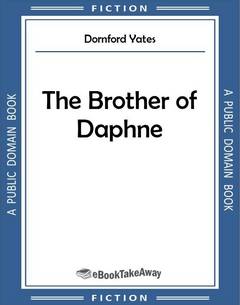 Read an excerpt and download The Brother of Daphne by Dornford Yates for iPhone, iPad, Nook, Android, and Kindle in PDF and all popular eBook reader formats (AZW3, EPUB, MOBI).

"I said you'd do something," said Daphne, leaning back easily in her long chair.

I stopped swinging my legs and looked at her.

"Then you lied, darling. In your white throat," I said pleasantly.

"Your bond? Quite so. But not mine. The appointment I have in Town that day—"

"Which day?" said Daphne, with a faint smile.

It was a bazaar fete thing. Daphne and several others—euphemistically styled workers—had conspired and agreed together to obtain money by false pretences for and on behalf of a certain mission, to wit the Banana. I prefer to put it that way. There is a certain smack about the wording of an indictment. Almost a relish. The fact that two years before I had been let in for a stall and had defrauded fellow men and women of a considerable sum of money, but strengthened my determination not to be entrapped again. At the same time I realized that I was up against it.

The crime in question was fixed for Wednesday or Thursday—so much I knew. But no more. There was the rub. I really could not toil up to Town two days running.

"Let's see," I said carelessly, "the fete's on—er—Wednesday, or Thursday, is it?"

"Which day are you going up to Town?" said Daphne. I changed my ground.

"The Bananas are all right," I said, lighting a cigarette.

"They only ate a missionary the other day," said my sister.

"That's bad," said I musingly. "To any nation the consumption of home produce is of vital—"

"We want to make sixty pounds."

"To go towards their next meal? How much do missionaries cost?"

"To save their souls alive," said Daphne zealously.

"I'm glad something's to be saved alive," said I.

Before she could reply, tea began to appear. When the footman had retired to fetch the second instalment of accessories, I pointed the finger of scorn at the table, upon which he had set the tray.

"That parody emanated from a bazaar," I said contemptuously.

"It does for the garden," said my sister.