The Art of Lawn Tennis 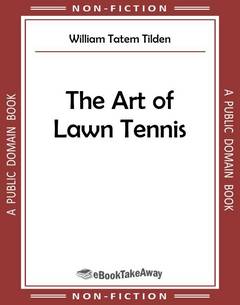 Tennis is at once an art and a science. The game as played by such men as Norman E. Brookes, the late Anthony Wilding, William M. Johnston, and R. N. Williams is art. Yet like all true art, it has its basis in scientific methods that must be learned and learned thoroughly for a foundation before the artistic structure of a great tennis game can be constructed.

Every player who helps to attain a high degree of efficiency should have a clearly defined method of development and adhere to it. He should be certain that it is based on sound principles and, once assured of that, follow it, even though his progress seems slow and discouraging.

I began tennis wrong. My strokes were wrong and my viewpoint clouded. I had no early training such as many of our American boys have at the present time. No one told me the importance of the fundamentals of the game, such as keeping the eye on the ball or correct body position and footwork. I was given a racquet and allowed to hit the ball. Naturally, like all beginners, I acquired many very serious faults. I worried along with moderate success until I had been graduated from school, beating some fairly good players, but losing some matches to men below my class. The year following my graduation the new Captain of my Alma Mater's team asked me if I would aid him in developing the squad for next year. Well, "Fools rush in where angels fear to tread," so I said Yes.

At that point my tennis education began.

The youngsters comprising our tennis squad all knew me well and felt at perfect liberty to ask me as many questions as they could think up. I was besieged with requests to explain why Jones missed a forehand drive down the side-line, or Smith couldn't serve well, or Brown failed to hit the ball at all. Frankly, I did not know, but I answered them something at the moment and said to myself it was time I learned some fundamentals of tennis. So I began to study the reasons why certain shots are missed and others made. Why certain balls are hit so much faster though with less effort than others, and why some players are great while most are only good. I am still studying, but my results to date have resulted in a definite system to be learned, and it is this which I hope to explain to you in my book.

Tennis has a language all its own. The idioms of the game should be learned, as all books on the game are written in tennis parlance. The technical terms and their counterpart in slang need to be understood to thoroughly grasp the idea in any written tennis account.

I do not believe in using a great deal of space carefully defining each blade of grass on a court, or each rule of the game. It gets nowhere. I do advocate teaching the terms of the game.