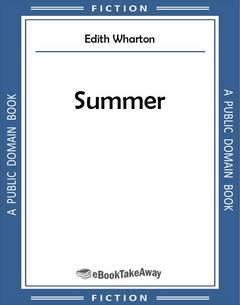 One of the first novels to deal honestly with a woman's sexual awakening, Summer created a sensation upon its 1917 publication.

The Pulitzer Prize–winning author of Ethan Frome shattered the standards of conventional love stories with candor and realism. Nearly a century later, this tale remains fresh and relevant.

A girl came out of lawyer Royall's house, at the end of the one street of North Dormer, and stood on the doorstep.

It was the beginning of a June afternoon. The springlike transparent sky shed a rain of silver sunshine on the roofs of the village, and on the pastures and larchwoods surrounding it. A little wind moved among the round white clouds on the shoulders of the hills, driving their shadows across the fields and down the grassy road that takes the name of street when it passes through North Dormer. The place lies high and in the open, and lacks the lavish shade of the more protected New England villages. The clump of weeping-willows about the duck pond, and the Norway spruces in front of the Hatchard gate, cast almost the only roadside shadow between lawyer Royall's house and the point where, at the other end of the village, the road rises above the church and skirts the black hemlock wall enclosing the cemetery.

The little June wind, frisking down the street, shook the doleful fringes of the Hatchard spruces, caught the straw hat of a young man just passing under them, and spun it clean across the road into the duck-pond.

As he ran to fish it out the girl on lawyer Royall's doorstep noticed that he was a stranger, that he wore city clothes, and that he was laughing with all his teeth, as the young and careless laugh at such mishaps.

Her heart contracted a little, and the shrinking that sometimes came over her when she saw people with holiday faces made her draw back into the house and pretend to look for the key that she knew she had already put into her pocket. A narrow greenish mirror with a gilt eagle over it hung on the passage wall, and she looked critically at her reflection, wished for the thousandth time that she had blue eyes like Annabel Balch, the girl who sometimes came from Springfield to spend a week with old Miss Hatchard, straightened the sunburnt hat over her small swarthy face, and turned out again into the sunshine.

"How I hate everything!" she murmured.

The young man had passed through the Hatchard gate, and she had the street to herself. North Dormer is at all times an empty place, and at three o'clock on a June afternoon its few able-bodied men are off in the fields or woods, and the women indoors, engaged in languid household drudgery.

The girl walked along, swinging her key on a finger, and looking about her with the heightened attention produced by the presence of a stranger in a familiar place. What, she wondered, did North Dormer look like to people from other parts of the world? She herself had lived there since the age of five, and had long supposed it to be a place of some importance. But about a year before, Mr. Miles, the new Episcopal clergyman at Hepburn, who drove over every other Sunday—when the roads were not ploughed up by hauling—to hold a service in the North Dormer church, had proposed, in a fit of missionary zeal, to take the young people down to Nettleton to hear an illustrated lecture on the Holy Land; and the dozen girls and boys who represented the future of North Dormer had been piled into a farm-waggon, driven over the hills to Hepburn, put into a way-train and carried to Nettleton.

In the course of that incredible day Charity Royall had, for the first and only time, experienced railway-travel, looked into shops with plate-glass fronts, tasted cocoanut pie, sat in a theatre, and listened to a gentleman saying unintelligible things before pictures that she would have enjoyed looking at if his explanations had not prevented her from understanding them. This initiation had shown her that North Dormer was a small place, and developed in her a thirst for information that her position as custodian of the village library had previously failed to excite. For a month or two she dipped feverishly and disconnectedly into the dusty volumes of the Hatchard Memorial Library; then the impression of Nettleton began to fade, and she found it easier to take North Dormer as the norm of the universe than to go on reading.

The sight of the stranger once more revived memories of Nettleton, and North Dormer shrank to its real size. As she looked up and down it, from lawyer Royall's faded red house at one end to the white church at the other, she pitilessly took its measure. There it lay, a weather-beaten sunburnt village of the hills, abandoned of men, left apart by railway, trolley, telegraph, and all the forces that link life to life in modern communities. It had no shops, no theatres, no lectures, no "business block"; only a church that was opened every other Sunday if the state of the roads permitted, and a library for which no new books had been bought for twenty years, and where the old ones mouldered undisturbed on the damp shelves. Yet Charity Royall had always been told that she ought to consider it a privilege that her lot had been cast in North Dormer. She knew that, compared to the place she had come from, North Dormer represented all the blessings of the most refined civilization. Everyone in the village had told her so ever since she had been brought there as a child. Even old Miss Hatchard had said to her, on a terrible occasion in her life: "My child, you must never cease to remember that it was Mr. Royall who brought you down from the Mountain."

She had been "brought down from the Mountain"; from the scarred cliff that lifted its sullen wall above the lesser slopes of Eagle Range, making a perpetual background of gloom to the lonely valley. The Mountain was a good fifteen miles away, but it rose so abruptly from the lower hills that it seemed almost to cast its shadow over North Dormer. And it was like a great magnet drawing the clouds and scattering them in storm across the valley. If ever, in the purest summer sky, there trailed a thread of vapour over North Dormer, it drifted to the Mountain as a ship drifts to a whirlpool, and was caught among the rocks, torn up and multiplied, to sweep back over the village in rain and darkness.