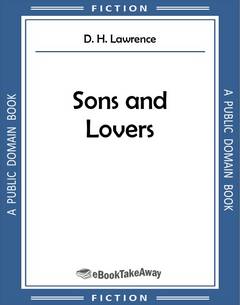 Sons and Lovers is a highly autobiographical and compelling portrayal of childhood, adolescence, and the price of family bonds.

Repelled by her uneducated and sometimes violent husband, delicate Gertrude Morel devotes her life to her sons.

But conflict is inevitable when Paul seeks relationships with women to escape the suffocating grasp of his mother.

CHAPTER I
THE EARLY MARRIED LIFE OF THE MORELS

"The Bottoms" succeeded to "Hell Row." Hell Row was a block of thatched, bulging cottages that stood by the brook-side on Greenhill Lane. There lived the colliers who worked in the little gin-pits two fields away. The brook ran under the alder-trees, scarcely soiled by these small mines, whose coal was drawn to the surface by donkeys that plodded wearily in a circle round a gin. And all over the countryside were these same pits, some of which had been worked in the time of Charles II, the few colliers and the donkeys burrowing down like ants into the earth, making queer mounds and little black places among the corn-fields and the meadows. And the cottages of these coal-miners, in blocks and pairs here and there, together with odd farms and homes of the stockingers, straying over the parish, formed the village of Bestwood.

Then, some sixty years ago, a sudden change took place. The gin-pits were elbowed aside by the large mines of the financiers. The coal and iron field of Nottinghamshire and Derbyshire was discovered. Carston, Waite and Co. appeared. Amid tremendous excitement, Lord Palmerston formally opened the company's first mine at Spinney Park, on the edge of Sherwood Forest.

About this time the notorious Hell Row, which through[4] growing old had acquired an evil reputation, was burned down, and much dirt was cleansed away.

Carston, Waite and Co. found they had struck on a good thing, so, down the valleys of the brooks from Selby and Nuttall, new mines were sunk, until soon there were six pits working. From Nuttall, high up on the sandstone among the woods, the railway ran, past the ruined priory of the Carthusians and past Robin Hood's Well, down to Spinney Park, then on to Minton, a large mine among corn-fields; from Minton across the farm-lands of the valley-side to Bunker's Hill, branching off there, and running north to Beggarlee and Selby, that looks over at Crich and the hills of Derbyshire; six mines like black studs on the countryside, linked by a loop of fine chain, the railway.

To accommodate the regiments of miners, Carston, Waite and Co. built the Squares, great quadrangles of dwellings on the hillside of Bestwood, and then, in the brook valley, on the site of Hell Row, they erected the Bottoms.

The Bottoms consisted of six blocks of miners' dwellings, two rows of three, like the dots on a blank-six domino, and twelve houses in a block. This double row of dwellings sat at the foot of the rather sharp slope from Bestwood, and looked out, from the attic windows at least, on the slow climb of the valley towards Selby.

The houses themselves were substantial and very decent. One could walk all round, seeing little front gardens with auriculas and saxifrage in the shadow of the bottom block, sweet-williams and pinks in the sunny top block; seeing neat front windows, little porches, little privet hedges, and dormer windows for the attics. But that was outside; that was the view on to the uninhabited parlours of all the colliers' wives. The dwelling-room, the kitchen, was at the back of the house, facing inward between the blocks, looking at a scrubby back garden, and then at the ash-pits. And between the rows, between the long lines of ash-pits, went the alley, where the children played and the women gossiped and the men smoked. So, the actual conditions of living[5] in the Bottoms, that was so well built and that looked so nice, were quite unsavoury because people must live in the kitchen, and the kitchens opened on to that nasty alley of ash-pits.

Mrs. Morel was not anxious to move into the Bottoms, which was already twelve years old and on the downward path, when she descended to it from Bestwood. But it was the best she could do. Moreover, she had an end house in one of the top blocks, and thus had only one neighbour; on the other side an extra strip of garden. And, having an end house, she enjoyed a kind of aristocracy among the other women of the "between" houses, because her rent was five shillings and sixpence instead of five shillings a week. But this superiority in station was not much consolation to Mrs. Morel.