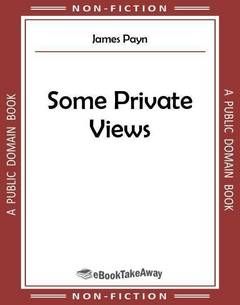 'The hidden but the common thought of all.'

The thoughts I am about to set down are not my thoughts, for, as my friends say, I have given up the practice of thinking, or it may be, as my enemies say, I never had it. They are the thoughts of an acquaintance who thinks for me. I call him an acquaintance, though I pass as much of my time with him as with my nearest and dearest; perhaps at the club, perhaps at the office, perhaps in metaphysical discussion, perhaps at billiards—what does it matter? Thousands of men in town have such acquaintances, in whose company they spend, by necessity or custom, half the sum of their lives. It is not rational, doubtless; but then 'Consider, sir,' said the great talking philosopher, 'should we become purely rational, how our friendships would be cut off. We form many such with bad men because they have agreeable qualities, or may be useful to us. We form many such by mistake, imagining people to be different from what they really are.' And he goes on complacently to observe that we shall either have the satisfaction of meeting these gentlemen in a future state, or be satisfied without meeting them.

For my part, I do not feel that the scheme of future happiness, which ought by rights to be in preparation for me, will be at all interfered with by my not meeting again the man I have in my. mind. To have seen him in the flesh is sufficient for me. In the spirit I cannot imagine him; the consideration is too subtle; for, unlike the little man who had (for certain) a little soul,' I don't believe he has a soul at all.

He is middle-aged, rich, lethargic, sententious, dogmatic, and, in short, the quintessence of the commonplace. I need not say, therefore, that he is credited by the world with unlimited common-sense. And for once the world is right. He has nothing-original about him, save so much of sin as he may have inherited from our first parents; there is no more at the back of him than at the back of a looking-glass—indeed less, for he has not a grain of quicksilver; but, like the looking-glass, he reflects. Having nothing else to do, he hangs, as it were, on the wall of the world, and mirrors it for me as it unconsciously passes by him—not, however, as in a glass darkly, but with singular clearness. His vision is never disturbed by passion or prejudice; he has no enthusiasm and no illusions. Nor do I believe he has ever had any. If the noblest study of mankind is man, my friend has devoted himself to a high calling; the living page of human life has been his favourite and indeed, for these many years, his only reading. And for this he has had exceptional opportunities. Always a man of wealth and leisure, he has never wasted himself in that superficial observation which is often the only harvest of foreign travel. He despises it, and in relation to travellers, is wont to quote the famous parallel of the copper wire, 'which grows the narrower by going further.' A confirmed stay-at-home, he has mingled much in society of all sorts, and exercised a keen but quite unsympathetic observation. His very reserve in company (though, when he catches you alone, he is a button-holder of great tenacity) encourages free speech in others; they have no more reticence in his presence than if he were the butler. He has belonged to no cliques, and thereby escaped the greatest peril which can beset the student of human nature. A man of genius, indeed, in these days is almost certain, sooner or later, to become the centre of a mutual admiration society; but the person I have in my mind is no genius, nor anything like one, and he thanks Heaven for it. To an opinion of his own he does not pretend, but his views upon the opinions of other people he believes to be infallible. I have called him dogmatic, but that does not at all express the absolute certainty with which he delivers judgment. 'I know no more,' he says, 'about the problems of human life than you do' (taking me as an illustration of the lowest prevailing ignorance), 'but I know what everybody is thinking about them.' He is didactic, and therefore often dull, and will eventually, no doubt, become one of the greatest bores in Great Britain. At present, however, he is worth knowing; and I propose to myself to be his Boswell, and to introduce him—or, at least, his views—to other people. I have entitled them the Midway Inn, partly from my own inveterate habit of story-telling, but chiefly from an image of his own, by which he once described to me, in his fine egotistic rolling style, the position he seemed to himself to occupy in the world.