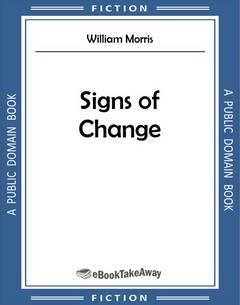 The word Revolution, which we Socialists are so often forced to use, has a terrible sound in most people’s ears, even when we have explained to them that it does not necessarily mean a change accompanied by riot and all kinds of violence, and cannot mean a change made mechanically and in the teeth of opinion by a group of men who have somehow managed to seize on the executive power for the moment.  Even when we explain that we use the word revolution in its etymological sense, and mean by it a change in the basis of society, people are scared at the idea of such a vast change, and beg that you will speak of reform and not revolution.  As, however, we Socialists do not at all mean by our word revolution what these worthy people mean by their word reform, I can’t help thinking that it would be a mistake to use it, whatever projects we might conceal beneath its harmless envelope.  So we will stick to our word, which means a change of the basis of society; it may frighten people, but it will at least warn them that there is something to be frightened about, which will be no less dangerous for being ignored; and also it may encourage some people, and will mean to them at least not a fear, but a hope.

Fear and Hope—those are the names of the two great passions which rule the race of man, and with which revolutionists have to deal; to give hope to the many oppressed and fear to the few oppressors, that is our business; if we do the first and give hope to the many, the few must be frightened by their hope; otherwise we do not want to frighten them; it is not revenge we want for poor people, but happiness; indeed, what revenge can be taken for all the thousands of years of the sufferings of the poor?

However, many of the oppressors of the poor, most of them, we will say, are not conscious of their being oppressors (we shall see why presently); they live in an orderly, quiet way themselves, as far as possible removed from the feelings of a Roman slave-owner or a Legree; they know that the poor exist, but their sufferings do not present themselves to them in a trenchant and dramatic way; they themselves have troubles to bear, and they think doubtless that to bear trouble is the lot of humanity, nor have they any means of comparing the troubles of their lives with those of people lower in the social scale; and if ever the thought of those heavier troubles obtrudes itself upon them, they console themselves with the maxim that people do get used to the troubles they have to bear, whatever they may be.

Indeed, as far as regards individuals at least, that is but too true, so that we have as supporters of the present state of things, however bad it may be, first those comfortable unconscious oppressors who think that they have everything to fear from any change which would involve more than the softest and most gradual of reforms, and secondly those poor people who, living hard and anxiously as they do, can hardly conceive of any change for the better happening to them, and dare not risk one tittle of their poor possessions in taking any action towards a possible bettering of their condition; so that while we can do little with the rich save inspire them with fear, it is hard indeed to give the poor any hope.  It is, then, no less than reasonable that those whom we try to involve in the great struggle for a better form of life than that which we now lead should call on us to give them at least some idea of what that life may be like.

A reasonable request, but hard to satisfy, since we are living under a system that makes conscious effort towards reconstruction almost impossible: it is not unreasonable on our part to answer, “There are certain definite obstacles to the real progress of man; we can tell you what these are; take them away, and then you shall see.”