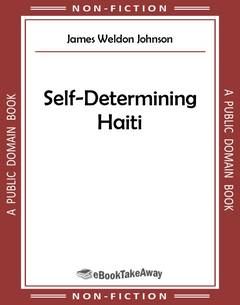 I. THE AMERICAN OCCUPATION

TO know the reasons for the present political situation in Haiti, to understand why the United States landed and has for five years maintained military forces in that country, why some three thousand Haitian men, women, and children have been shot down by American rifles and machine guns, it is necessary, among other things, to know that the National City Bank of New York is very much interested in Haiti. It is necessary to know that the National City Bank controls the National Bank of Haiti and is the depository for all of the Haitian national funds that are being collected by American officials, and that Mr. R. L. Farnham, vice-president of the National City Bank, is virtually the representative of the State Department in matters relating to the island republic. Most Americans have the opinionif they have any opinion at all on the subjectthat the United States was forced, on purely humane grounds, to intervene in the black republic because of the tragic coup d'etat which resulted in the overthrow and death of President Vilbrun Guillaume Sam and the execution of the political prisoners confined at Port-au-Prince, July 27-28, 1915; and that this government has been compelled to keep a military force in Haiti since that time to pacify the country and maintain order.

The fact is that for nearly a year before forcible intervention on the part of the United States this government was seeking to compel Haiti to submit to "peaceable" intervention. Toward the close of 1914 the United States notified the government of Haiti that it was disposed to recognize the newly-elected president, Theodore Davilmar, as soon as a Haitian commission would sign at Washington "satisfactory protocols" relative to a convention with the United States on the model of the Dominican-American Convention. On December 15, 1914, the Haitian government, through its Secretary of Foreign Affairs, replied: "The Government of the Republic of Haiti would consider itself lax in its duty to the United States and to itself if it allowed the least doubt to exist of its irrevocable intention not to accept any control of the administration of Haitian affairs by a foreign Power." On December 19, the United States, through its legation at Port-au-Prince, replied, that in expressing its willingness to do in Haiti what had been done in Santo Domingo it "was actuated entirely by a disinterested desire to give assistance."

Two months later, the Theodore government was overthrown by a revolution and Vilbrun Guillaume was elected president. Immediately afterwards there arrived at Port-au-Prince an American commission from Washingtonthe Ford mission. The commissioners were received at the National Palace and attempted to take up the discussion of the convention that had been broken off in December, 1914. However, they lacked full powers and no negotiations were entered into. After several days, the Ford mission sailed for the United States. But soon after, in May, the United States sent to Haiti Mr. Paul Fuller, Jr., with the title Envoy Extraordinary, on a special mission to apprise the Haitian government that the Guillaume administration would not be recognized by the American government unless Haiti accepted and signed the project of a convention which he was authorized to present. After examining the project the Haitian government submitted to the American commission a counter-project, formulating the conditions under which it would be possible to accept the assistance of the United States. To this counter-project Mr. Fuller proposed certain modifications, some of which were accepted by the Haitian government. On June 5, 1915, Mr. Fuller acknowledged the receipt of the Haitian communication regarding these modifications, and sailed from Port-au-Prince.

Before any further discussion of the Fuller project between the two governments, political incidents in Haiti led rapidly to the events of July, 27 and 28. On July 27 President Guillaume fled to the French Legation, and on the same day took place a massacre of the political prisoners in the prison at Port-au-Prince. On the morning of July 28 President Guillaume was forcibly taken from French Legation and killed. On the afternoon of July 28 an American man-of-war dropped anchor in the harbor of Port-au-Prince and landed American forces. It should be borne in mind that through all of this the life of not a single American citizen had been taken or jeopardized.

The overthrow of Guillaume and its attending consequences did not constitute the cause of American intervention in Haiti, but merely furnished the awaited opportunity. Since July 28, 1915, American military forces have been in control of Haiti. These forces have been increased until there are now somewhere near three thousand Americans under arms in the republic. From the very first, the attitude of the Occupation has been that it was dealing with a conquered territory. Haitian forces were disarmed, military posts and barracks were occupied, and the National Palace was taken as headquarters for the Occupation. After selecting a new and acceptable president for the country, steps were at once taken to compel the Haitian government to sign a convention in which it virtually foreswore its independence. This was accomplished by September 16, 1915; and although the terms of this convention provided for the administration of the Haitian customs by American civilian officials, all the principal custom houses of the country had been seized by military force and placed in charge of American Marine officers before the end of August. The disposition of the funds collected in duties from the time of the military seizure of the custom houses to the time of their administration by civilian officials is still a question concerning which the established censorship in Haiti allows no discussion.