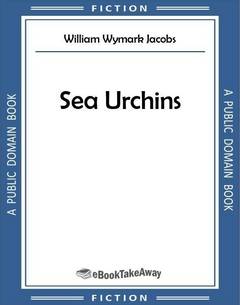 Wapping Old Stairs?" said the rough individual, shouldering the bran-new sea-chest, and starting off at a trot with it; "yus, I know the place, captin. Fust v'y'ge, sir?"

"Ay, ay, my hearty," replied the owner of the chest, a small, ill-looking lad of fourteen. "Not so fast with those timbers of yours. D'ye hear?"

"All right, sir," said the man, and, slackening his pace, twisted his head round to take stock of his companion.

"This ain't your fust v'y'ge, captin," he said admiringly; "don't tell me. I could twig that directly I see you. Ho, what's the use o' trying to come it over a poor 'ard-working man like that?"

"I don't think there's much about the sea I don't know," said the boy in a satisfied voice. "Starboard, starboard your hellum a bit."

The man obeying promptly, they went the remainder of the distance in this fashion, to the great inconvenience of people coming from the other direction.

"And a cheap 'arf-crown's worth, too, captin," said the man, as he put the chest down at the head of the stairs and thoughtfully sat on it pending payment.

"I want to go off to the Susan Jane," said the boy, turning to a waterman who was sitting in his boat, holding on to the side of the steps with his hand.

"Put it aboard," said the boy to the other man.

"But you said sixpence at the station," said the boy.

"Two an' sixpence, captin," said the man, still smiling, "but I'm a bit 'usky, an' p'raps you didn't hear the two—'arf a crown's the regler price. We ain't allowed to do it under."

"Give the man 'is 'arf-crown," said the waterman, with sudden heat; "that's 'is price, and my fare's eigh-teen pence."

"All right," said the boy readily; "cheap, too. I didn't know the price, that's all. But I can't pay either of you till I get aboard. I've only got sixpence. I'll tell the captain to give you the rest."

"Tell 'oo?" demanded the light-porter, with some violence.

"The captain," said the boy.

"Look 'ere, you give me that 'arf-crown," said the other, "else I'll chuck your box overboard, an' you after it."

"Wait a minute, then," said the boy, darting away up the narrow alley which led to the stairs; "I'll go and get change."

"Get off that box," said the big policeman who had come back with the boy. "Take your sixpence an' go. If I catch you down this way again——"

He finished the sentence by taking the fellow by the scruff of the neck and giving him a violent push as he passed him.

"Waterman's fare is threepence," he said to the boy, as the man in the boat, with an utterly expressionless face, took the chest from him, "I'll stay here till he has put you aboard."

The boy took his seat, and the waterman, breathing hard, pulled out towards the vessels in the tier. He looked at the boy and then at the figure on the steps, and, apparently suppressing a strong inclination to speak, spat violently over the side.

The waterman, affecting not to hear, looked over his shoulder, and pulled strongly with his left towards a small schooner, from the deck of which a couple of men were watching the small figure in the boat.

"That's the boy I was going to tell you about," said the skipper, "and remember this 'ere ship's a pirate."

"It's got a lot o' pirates aboard of it," said the mate fiercely, as he turned and regarded the crew, "a set o' lazy, loafing, idle, worthless——"

"It's for the boy's sake," interrupted the skipper.

"Where'd you pick him up?" inquired the other.

"He's the son of a friend o' mine what I've brought aboard to oblige," replied the skipper. "He's got a fancy for being a pirate, so just to oblige his father I told him we was a pirate. He wouldn't have come if I hadn't."

"I'll pirate him," said the mate, rubbing his hands.