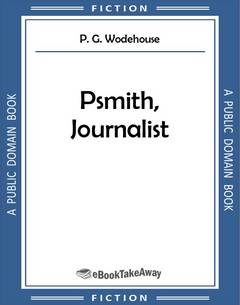 Psmith is on a cricketing tour to New York and befriends Billy Windsor, acting editor of Cosy Moments magazine.

With Psmith's encouragement they use the magazine to highlight the New York slum problem.

Very soon gangsters are trying to put them out of business for good.

The man in the street would not have known it, but a great crisis was imminent in New York journalism.

Everything seemed much as usual in the city. The cars ran blithely on Broadway. Newsboys shouted "Wux-try!" into the ears of nervous pedestrians with their usual Caruso-like vim. Society passed up and down Fifth Avenue in its automobiles, and was there a furrow of anxiety upon Society's brow? None. At a thousand street corners a thousand policemen preserved their air of massive superiority to the things of this world. Not one of them showed the least sign of perturbation. Nevertheless, the crisis was at hand. Mr. J. Fillken Wilberfloss, editor-in-chief of Cosy Moments, was about to leave his post and start on a ten weeks' holiday.

In New York one may find every class of paper which the imagination can conceive. Every grade of society is catered for. If an Esquimau came to New York, the first thing he would find on the bookstalls in all probability would be the Blubber Magazine, or some similar production written by Esquimaux for Esquimaux. Everybody reads in New York, and reads all the time. The New Yorker peruses his favourite paper while he is being jammed into a crowded compartment on the subway or leaping like an antelope into a moving Street car.

There was thus a public for Cosy Moments. Cosy Moments, as its name (an inspiration of Mr. Wilberfloss's own) is designed to imply, is a journal for the home. It is the sort of paper which the father of the family is expected to take home with him from his office and read aloud to the chicks before bed-time. It was founded by its proprietor, Mr. Benjamin White, as an antidote to yellow journalism. One is forced to admit that up to the present yellow journalism seems to be competing against it with a certain measure of success. Headlines are still of as generous a size as heretofore, and there is no tendency on the part of editors to scamp the details of the last murder-case.

Nevertheless, Cosy Moments thrives. It has its public.

Its contents are mildly interesting, if you like that sort of thing. There is a "Moments in the Nursery" page, conducted by Luella Granville Waterman, to which parents are invited to contribute the bright speeches of their offspring, and which bristles with little stories about the nursery canary, by Jane (aged six), and other works of rising young authors. There is a "Moments of Meditation" page, conducted by the Reverend Edwin T. Philpotts; a "Moments Among the Masters" page, consisting of assorted chunks looted from the literature of the past, when foreheads were bulgy and thoughts profound, by Mr. Wilberfloss himself; one or two other pages; a short story; answers to correspondents on domestic matters; and a "Moments of Mirth" page, conducted by an alleged humorist of the name of B. Henderson Asher, which is about the most painful production ever served up to a confiding public.