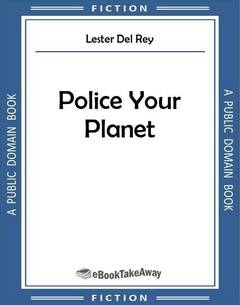 There were ten passengers in the little pressurized cabin of the electric bus that shuttled between the rocket field and Marsport. Ten men, the driver—and Bruce Gordon.

He sat apart from the others, as he had kept to himself on the ten-day trip between Earth and Mars, with the yellow stub of his ticket still stuck defiantly in the band of his hat, proclaiming that Earth had paid his passage without his permission being asked. His big, lean body was slumped slightly in the seat. There was no expression on his face.

He listened to the driver explaining to a couple of firsters that they were actually on what appeared to be one of the mysterious canals when viewed from Earth. Every book on Mars gave the fact that the canals were either an illusion or something which could not be detected on the surface of the planet.

He glanced back toward the rocket that still pointed skyward back on the field, and then forward toward the city of Marsport, sprawling out in a mess of slums beyond the edges of the dome that had been built to hold air over the central part. And at last he stirred and reached for the yellow stub.

He grimaced at the One Way stamped on it, then tore it into bits and let the pieces scatter over the floor. He counted them as they fell; thirty pieces, one for each year of his life. Little ones for the two years he'd wasted as a cop. Shreds for the four years as a kid in the ring before that—he'd never made the top. Bigger bits for two years also wasted in trying his hand at professional gambling; and the six final pieces that spelled his rise from a special reporter helping out with a police shake-up coverage, through a regular leg-man turning up rackets, and on up like a meteor until.... He'd made his big scoop, all right. He'd dug up enough about the Mercury scandals to double circulation.

And the government had explained what a fool he'd been for printing half of a story that was never supposed to be printed until all could be revealed. They'd given Bruce Gordon his final assignment.

He shrugged. He'd bought a suit of airtight coveralls and a helmet at the field; he had some cash, and a set of reader cards in his pocket. The supply house, Earthside, had assured him that this pattern had never been exported to Mars. With them and the knife he'd selected, he might get by.

The Solar Security office had given him the knife practice, to make sure he could use it, just as they'd made sure he hadn't taken extra money with him beyond the regulation amount.

"You're a traitor, and we'd like nothing better than seeing your guts spilled," the Security man had told him. "That paper you swiped was marked top secret. But we don't get many men with your background—cop, tinhorn, fighter—who have brains enough for our work. So you're bound for Mars, rather than the Mercury mines. If..."

It was a big if, and a vague one. They needed men on Mars who could act as links in their information bureau, and be ready to work on their side when the expected trouble came. They wanted men who could serve them loyally, even without orders. If he did them enough service, they might let him back to Earth. If he caused trouble enough, they could still ship him to Mercury.

"And suppose nothing happens?" he asked.

"Then who cares? You're just lucky enough to be alive."

"And what makes you think I'm going to be a spy for Security?"

The other had shrugged. "Why not, Gordon? You've been a spy for a yellow scandal sheet. Why not for us?"

Gordon had been smart enough to realize that perhaps Security was right.

They were in the slums around the city now. Marsport had been settled faster than it was ready to receive. Temporary buildings had been thrown up, and then had remained, decaying into deathtraps. It wasn't a pretty view that visitors got as they first reached Mars. But nobody except the romantic fools had ever thought frontiers were pretty.

The drummer who had watched Gordon tear up his yellow stub moved forward now. "First time?" he asked.

Gordon nodded, mentally cataloguing the drummer as the cockroach type, midway between the small-businessman slug and the petty-crook spider types that weren't worth bothering with. But the other took it as interest.

"Been here dozens of times, myself. Risking your life just to go into Marsport. Why Congress doesn't clean it up, I'll never know!"

Gordon's mind switched to the readers in his bag. The cards were plastic, and should be good for a week or so of use before they showed wear. During that time, by playing it carefully, he should have his stake. Then, if the gaming tables here were as crudely run as an oldtimer he'd known on Earth had said, he could try a coup.

"... be at Mother Corey's soon," the fat little drummer babbled on. "Notorious—worst place on Mars. Take it from me, brother, that's something! Even the cops are afraid to go in there. See it? There, to your left!"