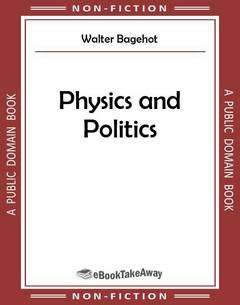 One peculiarity of this age is the sudden acquisition of much physical knowledge. There is scarcely a department of science or art which is the same, or at all the same, as it was fifty years ago. A new world of inventions—of railways and of telegraphs—has grown up around us which we cannot help seeing; a new world of ideas is in the air and affects us, though we do not see it. A full estimate of these effects would require a great book, and I am sure I could not write it; but I think I may usefully, in a few papers, show how, upon one or two great points, the new ideas are modifying two old sciences—politics and political economy. Even upon these points my ideas must be incomplete, for the subject is novel; but, at any rate, I may suggest some conclusions, and so show what is requisite even if I do not supply it.

If we wanted to describe one of the most marked results, perhaps the most marked result, of late thought, we should say that by it everything is made 'an antiquity.' When, in former times; our ancestors thought of an antiquarian, they described him as occupied with coins, and medals, and Druids' stones; these were then the characteristic records of the decipherable past, and it was with these that decipherers busied themselves. But now there are other relics; indeed, all matter is become such. Science tries to find in each bit of earth the record of the causes which made it precisely what it is; those forces have left their trace, she knows, as much as the tact and hand of the artist left their mark on a classical gem. It would be tedious (and it is not in my way) to reckon up the ingenious questionings by which geology has made part of the earth, at least, tell part of its tale; and the answers would have been meaningless if physiology and conchology and a hundred similar sciences had not brought their aid. Such subsidiary sciences are to the decipherer of the present day what old languages were to the antiquary of other days; they construe for him the words which he discovers, they give a richness and a truth-like complexity to the picture which he paints, even in cases where the particular detail they tell is not much. But what here concerns me is that man himself has, to the eye of science, become 'an antiquity.' She tries to read, is beginning to read, knows she ought to read, in the frame of each man the result of a whole history of all his life, of what he is and what makes him so,—of all his fore-fathers, of what they were and of what made them so. Each nerve has a sort of memory of its past life, is trained or not trained, dulled or quickened, as the case may be; each feature is shaped and characterised, or left loose and meaningless, as may happen; each hand is marked with its trade and life, subdued to what it works in;—IF WE COULD BUT SEE IT.

It may be answered that in this there is nothing new; that we always knew how much a man's past modified a man's future; that we all knew how much, a man is apt to be like his ancestors; that the existence of national character is the greatest commonplace in the world; that when a philosopher cannot account for anything in any other manner, he boldly ascribes it to an occult quality in some race. But what physical science does is, not to discover the hereditary element, but to render it distinct,—to give us an accurate conception of what we may expect, and a good account of the evidence by which we are led to expect it. Let us see what that science teaches on the subject; and, as far as may be, I will give it in the words of those who have made it a professional study, both that I may be more sure to state it rightly and vividly, and because—as I am about to apply these principles to subjects which are my own pursuit—I would rather have it quite clear that I have not made my premises to suit my own conclusions.