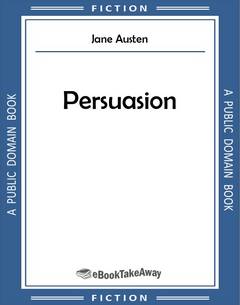 Read an excerpt and download Persuasion by Jane Austen for iPhone, iPad, Android, and Kindle in PDF and all popular eBook reader formats (AZW3, EPUB, MOBI).

Anne Elliot seems to have given up on present happiness and has resigned herself to living off her memories. More than seven years earlier she complied with duty: persuaded to view the match as imprudent and improper, she broke off her engagement to a naval captain with neither fortune, ancestry, nor prospects.

However, when peacetime arrives and brings the Navy home, and Anne encounters Captain Wentworth once more, she starts to believe in second chances. Persuasion celebrates romantic constancy in an era of turbulent change. Written as the Napoleonic Wars were ending, the novel examines how a woman can at once remain faithful to her past and still move forward into the future.

Sir Walter Elliot, of Kellynch Hall, in Somersetshire, was a man who, for his own amusement, never took up any book but the Baronetage; there he found occupation for an idle hour, and consolation in a distressed one; there his faculties were roused into admiration and respect, by contemplating the limited remnant of the earliest patents; there any unwelcome sensations, arising from domestic affairs changed naturally into pity and contempt as he turned over the almost endless creations of the last century; and there, if every other leaf were powerless, he could read his own history with an interest which never failed. This was the page at which the favourite volume always opened:

Precisely such had the paragraph originally stood from the printer's hands; but Sir Walter had improved it by adding, for the information of himself and his family, these words, after the date of Mary's birth--"Married, December 16, 1810, Charles, son and heir of Charles Musgrove, Esq. of Uppercross, in the county of Somerset," and by inserting most accurately the day of the month on which he had lost his wife.

Then followed the history and rise of the ancient and respectable family, in the usual terms; how it had been first settled in Cheshire; how mentioned in Dugdale, serving the office of high sheriff, representing a borough in three successive parliaments, exertions of loyalty, and dignity of baronet, in the first year of Charles II, with all the Marys and Elizabeths they had married; forming altogether two handsome duodecimo pages, and concluding with the arms and motto:--"Principal seat, Kellynch Hall, in the county of Somerset," and Sir Walter's handwriting again in this finale:--

Vanity was the beginning and the end of Sir Walter Elliot's character; vanity of person and of situation. He had been remarkably handsome in his youth; and, at fifty-four, was still a very fine man. Few women could think more of their personal appearance than he did, nor could the valet of any new made lord be more delighted with the place he held in society. He considered the blessing of beauty as inferior only to the blessing of a baronetcy; and the Sir Walter Elliot, who united these gifts, was the constant object of his warmest respect and devotion.

His good looks and his rank had one fair claim on his attachment; since to them he must have owed a wife of very superior character to any thing deserved by his own. Lady Elliot had been an excellent woman, sensible and amiable; whose judgement and conduct, if they might be pardoned the youthful infatuation which made her Lady Elliot, had never required indulgence afterwards.--She had humoured, or softened, or concealed his failings, and promoted his real respectability for seventeen years; and though not the very happiest being in the world herself, had found enough in her duties, her friends, and her children, to attach her to life, and make it no matter of indifference to her when she was called on to quit them.--Three girls, the two eldest sixteen and fourteen, was an awful legacy for a mother to bequeath, an awful charge rather, to confide to the authority and guidance of a conceited, silly father. She had, however, one very intimate friend, a sensible, deserving woman, who had been brought, by strong attachment to herself, to settle close by her, in the village of Kellynch; and on her kindness and advice, Lady Elliot mainly relied for the best help and maintenance of the good principles and instruction which she had been anxiously giving her daughters.

This friend, and Sir Walter, did not marry, whatever might have been anticipated on that head by their acquaintance. Thirteen years had passed away since Lady Elliot's death, and they were still near neighbours and intimate friends, and one remained a widower, the other a widow.

That Lady Russell, of steady age and character, and extremely well provided for, should have no thought of a second marriage, needs no apology to the public, which is rather apt to be unreasonably discontented when a woman does marry again, than when she does not; but Sir Walter's continuing in singleness requires explanation. Be it known then, that Sir Walter, like a good father, (having met with one or two private disappointments in very unreasonable applications), prided himself on remaining single for his dear daughters' sake. For one daughter, his eldest, he would really have given up any thing, which he had not been very much tempted to do. Elizabeth had succeeded, at sixteen, to all that was possible, of her mother's rights and consequence; and being very handsome, and very like himself, her influence had always been great, and they had gone on together most happily. His two other children were of very inferior value. Mary had acquired a little artificial importance, by becoming Mrs Charles Musgrove; but Anne, with an elegance of mind and sweetness of character, which must have placed her high with any people of real understanding, was nobody with either father or sister; her word had no weight, her convenience was always to give way--she was only Anne.

To Lady Russell, indeed, she was a most dear and highly valued god-daughter, favourite, and friend. Lady Russell loved them all; but it was only in Anne that she could fancy the mother to revive again.

A few years before, Anne Elliot had been a very pretty girl, but her bloom had vanished early; and as even in its height, her father had found little to admire in her, (so totally different were her delicate features and mild dark eyes from his own), there could be nothing in them, now that she was faded and thin, to excite his esteem. He had never indulged much hope, he had now none, of ever reading her name in any other page of his favourite work. All equality of alliance must rest with Elizabeth, for Mary had merely connected herself with an old country family of respectability and large fortune, and had therefore given all the honour and received none: Elizabeth would, one day or other, marry suitably.