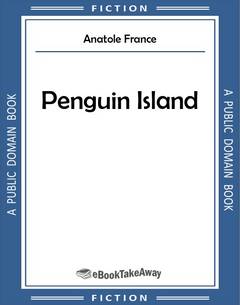 Penguin Island is a satirical novel detailing the history of the penguins. It is written as a critique of human nature and France's political history.

BOOK I. THE BEGINNINGS

I. LIFE OF SAINT MAEL

Mael, a scion of a royal family of Cambria, was sent in his ninth year to the Abbey of Yvern so that he might there study both sacred and profane learning. At the age of fourteen he renounced his patrimony and took a vow to serve the Lord. His time was divided, according to the rule, between the singing of hymns, the study of grammar, and the meditation of eternal truths.

A celestial perfume soon disclosed the virtues of the monk throughout the cloister, and when the blessed Gal, the Abbot of Yvern, departed from this world into the next, young Mael succeeded him in the government of the monastery. He established therein a school, an infirmary, a guest-house, a forge, work-shops of all kinds, and sheds for building ships, and he compelled the monks to till the lands in the neighbourhood. With his own hands he cultivated the garden of the Abbey, he worked in metals, he instructed the novices, and his life was gently gliding along like a stream that reflects the heaven and fertilizes the fields.

At the close of the day this servant of God was accustomed to seat himself on the cliff, in the place that is to-day still called St. Mael's chair. At his feet the rocks bristling with green seaweed and tawny wrack seemed like black dragons as they faced the foam of the waves with their monstrous breasts. He watched the sun descending into the ocean like a red Host whose glorious blood gave a purple tone to the clouds and to the summits of the waves. And the holy man saw in this the image of the mystery of the Cross, by which the divine blood has clothed the earth with a royal purple. In the offing a line of dark blue marked the shores of the island of Gad, where St. Bridget, who had been given the veil by St. Malo, ruled over a convent of women.

Now Bridget, knowing the merits of the venerable Mael, begged from him some work of his hands as a rich present. Mael cast a hand-bell of bronze for her and, when it was finished, he blessed it and threw it into the sea. And the bell went ringing towards the coast of Gad, where St. Bridget, warned by the sound of the bell upon the waves, received it piously, and carried it in solemn procession with singing of psalms into the chapel of the convent.

Thus the holy Mael advanced from virtue to virtue. He had already passed through two-thirds of the way of life, and he hoped peacefully to reach his terrestrial end in the midst of his spiritual brethren, when he knew by a certain sign that the Divine wisdom had decided otherwise, and that the Lord was calling him to less peaceful but not less meritorious labours.