On the Edge of the War Zone 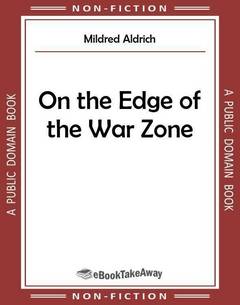 Download On the Edge of the War Zone by Mildred Aldrich for iPhone, iPad, Nook, Android, and Kindle in PDF and all popular eBook reader formats (AZW3, EPUB, MOBI).

More and more I find that we humans are queer animals.

All through those early, busy, exciting days of September,—can it be only a fortnight ago?—I was possessed, like the "busy bee," to "employ each shining hour" by writing out my adventures. Yet, no sooner was the menace of those days gone, than, for days at a time, I had no desire to see a pen.

Perhaps it was because we were so absolutely alone, and because, for days, I had no chance to send you the letters I had written, nor to get any cable to you to tell you that all was well.

There was a strange sort of soulagement in the conviction that we had, as my neighbors say, "échappé bien." I suppose it is human. It was like the first days of a real convalescence—life is so good, the world is so beautiful. The war was still going on. We still heard the cannon—they are booming this minute—but we had not seen the spiked helmets dashing up my hill, nor watched the walls of our little hamlet fall. I imagine that if human nature were not just like that, Life could never be beautiful to any thinking person. We all know that, though it be not today, it is to be, but we seem to be fitted for that, and the idea does not spoil life one bit.

It is very silent here most of the time. We are so few. Everybody works. No one talks much. With the cannon booming out there no one feels in the humor, though now and then we do get shaken up a bit. Everything seems a long time ago. Yet it is really only nine days since the French troops advanced—nine days since Paris was saved.

The most amazing thing of all is that our communications, which were cut on September 2, were reopened, in a sort of a way, on the 10th. That was only one week of absolute isolation. On that day we were told that postal communication with Paris was to be reopened with an automobile service from Couilly to Lagny, from which place, on the other side of the Marne, trains were running to Paris.

So Amélie gathered up my letters, and carried them down the hill, and dropped them hopefully in the box under the shuttered window of the post-office in the deserted town.

That was six days ago, and it is only this morning that I began to feel like writing to you again. I wanted to cable, but there is no way yet, so I can only hope that you know your geography well enough not to have worried since the 7th.

Although we are so shut in, we got news from the other side of the Marne on Wednesday, the 9th, the day after I wrote to you—the fifth day of the battle. Of course we had no newspapers; our mairie and post-office being closed, there was no telegraphic news. Besides, our telegraph wires are dangling from the poles just as the English engineers left them on September 2. It seems a century ago.

We knew the Germans were still retreating because each morning the booming of the cannon and the columns of smoke were further off, and because the slopes and the hills before us, which had been burning the first three days of the battle, were lying silent in the wonderful sunshine, as if there were no living people in the world except us few on this side of the river.

At no time can we see much movement across the river except with a glass. The plains are undulating. The roads are tree-lined. We trace them by the trees. But the silence over there seems different today. Here and there still thin ribbons of smoke—now rising straight in the air, and now curling in the breeze—say that something is burning, not only in the bombarded towns, but in the woods and plains. But what? No one knows.

One or two of our older men crossed the Marne on a raft on the 10th, the sixth day of the battle. They brought back word that thousands from the battles of the 5th, 6th, and 7th had lain for days un-buried under the hot September sun, but that the fire department was already out there from Paris, and that it would only be a few days when the worst marks of the terrible fight would be removed. But they brought back no news. The few people who had remained hidden in cellars or on isolated farms knew no more than we did, and it was impossible, naturally, to get near to the field ambulance at Neufmortier, which we can see from my lawn.

However, on the 9th—the very day after the French advanced from here—we got news in a very amusing way. We had to take it for what it was worth, or seemed to be. It was just after noon. I was working in the garden on the south side of the house. I had instinctively put the house between me and the smoke of battle when Amélie came running down the hill in a high state of excitement, crying out that the French were "coming back," that there had been a "great victory," and that I was to "come and see."

She was in too much of a hurry to explain or wait for any questions. She simply started across the fields in the direction of the Demi-Lune, where the route nationale from Meaux makes a curve to run down the long hill to Couilly.

I grabbed a sunbonnet, picked up my glasses, and followed her to a point in the field from which I could see the road.

Sure enough—there they were—cuirassiers—the sun glinting on their helmets, riding slowly towards Paris, as gaily as if returning from a fête, with all sorts of trophies hanging to their saddles.

I was content to go no nearer. It was no army returning. It was only a small detachment. Still, I could not help feeling that if any of them were returning in that spirit, while the cannon were still booming, all must be well.

Amélie ran all the way to the Demi-Lune—a little more than a quarter of a mile. I could see her simply flying over the ground. I waited where I was until she came back, crying breathlessly, long before she reached me:

"Oh, madame, what do you think? The regiment which was here yesterday captured a big, big cannon."