On the Art of Poetry 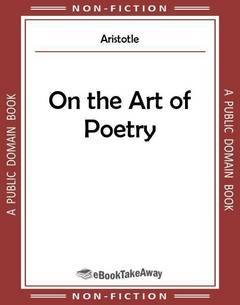 Download On the Art of Poetry by Aristotle for iPhone, iPad, Nook, Android, and Kindle in PDF and all popular eBook reader formats (AZW3, EPUB, MOBI).

Our subject being Poetry, I propose to speak not only of the art in general but also of its species and their respective capacities; of the structure of plot required for a good poem; of the number and nature of the constituent parts of a poem; and likewise of any other matters in the same line of inquiry. Let us follow the natural order and begin with the primary facts.

Epic poetry and Tragedy, as also Comedy, Dithyrambic poetry, and most flute-playing and lyre-playing, are all, viewed as a whole, modes of imitation. But at the same time they differ from one another in three ways, either by a difference of kind in their means, or by differences in the objects, or in the manner of their imitations.

I. Just as form and colour are used as means by some, who (whether by art or constant practice) imitate and portray many things by their aid, and the voice is used by others; so also in the above-mentioned group of arts, the means with them as a whole are rhythm, language, and harmony—used, however, either singly or in certain combinations. A combination of rhythm and harmony alone is the means in flute-playing and lyre-playing, and any other arts there may be of the same description, e.g. imitative piping. Rhythm alone, without harmony, is the means in the dancer's imitations; for even he, by the rhythms of his attitudes, may represent men's characters, as well as what they do and suffer. There is further an art which imitates by language alone, without harmony, in prose or in verse, and if in verse, either in some one or in a plurality of metres. This form of imitation is to this day without a name. We have no common name for a mime of Sophron or Xenarchus and a Socratic Conversation; and we should still be without one even if the imitation in the two instances were in trimeters or elegiacs or some other kind of verse—though it is the way with people to tack on 'poet' to the name of a metre, and talk of elegiac-poets and epic-poets, thinking that they call them poets not by reason of the imitative nature of their work, but indiscriminately by reason of the metre they write in. Even if a theory of medicine or physical philosophy be put forth in a metrical form, it is usual to describe the writer in this way; Homer and Empedocles, however, have really nothing in common apart from their metre; so that, if the one is to be called a poet, the other should be termed a physicist rather than a poet. We should be in the same position also, if the imitation in these instances were in all the metres, like the Centaur (a rhapsody in a medley of all metres) of Chaeremon; and Chaeremon one has to recognize as a poet. So much, then, as to these arts. There are, lastly, certain other arts, which combine all the means enumerated, rhythm, melody, and verse, e.g. Dithyrambic and Nomic poetry, Tragedy and Comedy; with this difference, however, that the three kinds of means are in some of them all employed together, and in others brought in separately, one after the other. These elements of difference in the above arts I term the means of their imitation.