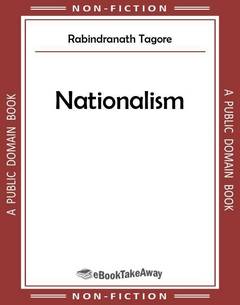 NATIONALISM IN THE WEST

Man's history is being shaped according to the difficulties it encounters. These have offered us problems and claimed their solutions from us, the penalty of non-fulfilment being death or degradation.

These difficulties have been different in different peoples of the earth, and in the manner of our overcoming them lies our distinction.

The Scythians of the earlier period of Asiatic history had to struggle with the scarcity of their natural resources. The easiest solution that they could think of was to organize their whole population, men, women, and children, into bands of robbers. And they were irresistible to those who were chiefly engaged in the constructive work of social co-operation.

But fortunately for man the easiest path is not his truest path. If his nature were not as complex as it is, if it were as simple as that of a pack of hungry wolves, then, by this time, those hordes of marauders would have overrun the whole earth. But man, when confronted with difficulties, has to acknowledge that he is man, that he has his responsibilities to the higher faculties of his nature, by ignoring which he may achieve success that is immediate, perhaps, but that will become a death-trap to him. For what are obstacles to the lower creatures are opportunities to the higher life of man.

To India has been given her problem from the beginning of history—it is the race problem. Races ethnologically different have in this country come into close contact. This fact has been and still continues to be the most important one in our history. It is our mission to face it and prove our humanity by dealing with it in the fullest truth. Until we fulfil our mission all other benefits will be denied us.

There are other peoples in the world who have to overcome obstacles in their physical surroundings, or the menace of their powerful neighbours. They have organized their power till they are not only reasonably free from the tyranny of Nature and human neighbours, but have a surplus of it left in their hands to employ against others. But in India, our difficulties being internal, our history has been the history of continual social adjustment and not that of organized power for defence and aggression.

Neither the colourless vagueness of cosmopolitanism, nor the fierce self-idolatry of nation-worship, is the goal of human history. And India has been trying to accomplish her task through social regulation of differences, on the one hand, and the spiritual recognition of unity on the other. She has made grave errors in setting up the boundary walls too rigidly between races, in perpetuating in her classifications the results of inferiority; often she has crippled her children's minds and narrowed their lives in order to fit them into her social forms; but for centuries new experiments have been made and adjustments carried out.

Her mission has been like that of a hostess who has to provide proper accommodation for numerous guests, whose habits and requirements are different from one another. This gives rise to infinite complexities whose solution depends not merely upon tactfulness but upon sympathy and true realization of the unity of man. Towards this realization have worked, from the early time of the Upanishads up to the present moment, a series of great spiritual teachers, whose one object has been to set at naught all differences of man by the overflow of our consciousness of God. In fact, our history has not been of the rise and fall of kingdoms, of fights for political supremacy. In our country records of these days have been despised and forgotten, for they in no way represent the true history of our people. Our history is that of our social life and attainment of spiritual ideals.