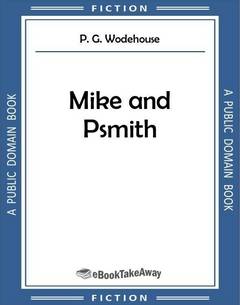 More cricketing adventures for Mike culminating in an end of season match against his old school.

MR. JACKSON MAKES UP HIS MIND

If Mike had been in time for breakfast that fatal Easter morning he might have gathered from the expression on his father's face, as Mr. Jackson opened the envelope containing his school report and read the contents, that the document in question was not exactly a paean of praise from beginning to end. But he was late, as usual. Mike always was late for breakfast in the holidays.

When he came down on this particular morning, the meal was nearly over. Mr. Jackson had disappeared, taking his correspondence with him; Mrs. Jackson had gone into the kitchen, and when Mike appeared the thing had resolved itself into a mere vulgar brawl between Phyllis and Ella for the jam, while Marjory, recently affecting a grown-up air, looked on in a detached sort of way, as if these juvenile gambols distressed her.

"Hello, Mike," she said, jumping up as he entered, "here you are-I've been keeping everything hot for you."

"Have you? Thanks awfully. I say …" His eye wandered in mild surprise round the table. "I'm a bit late."

Marjory was bustling about, fetching and carrying for Mike, as she always did. She had adopted him at an early age, and did the thing thoroughly. She was fond of her other brothers, especially when they made centuries in first-class cricket, but Mike was her favorite. She would field out in the deep as a natural thing when Mike was batting at the net in the paddock, though for the others, even for Joe, who had played in all five Test Matches in the previous summer, she would do it only as a favor.

Phyllis and Ella finished their dispute and went out. Marjory sat on the table and watched Mike eat.

"Your report came this morning, Mike," she said.

The kidneys failed to retain Mike's undivided attention. He looked up interested. "What did it say?"

"I didn't see-I only caught sight of the Wrykyn crest on the envelope.
Father didn't say anything."

Mike seemed concerned. "I say, that looks rather rotten! I wonder if it was awfully bad. It's the first I've had from Appleby."

"It can't be any worse than the horrid ones Mr. Blake used to write when you were in his form."

"No, that's a comfort," said Mike philosophically. "Think there's any more tea in that pot?"