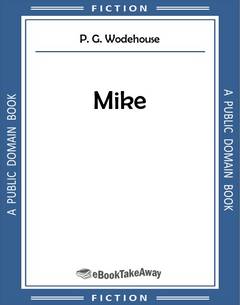 Through a series of adventures and mis-adventures Mike achieves his ambition of playing for the school team.

Can they win the end of seaon match against their biggest rivals?

It was a morning in the middle of April, and the Jackson family were consequently breakfasting in comparative silence.  The cricket season had not begun, and except during the cricket season they were in the habit of devoting their powerful minds at breakfast almost exclusively to the task of victualling against the labours of the day.  In May, June, July, and August the silence was broken.  The three grown-up Jacksons played regularly in first-class cricket, and there was always keen competition among their brothers and sisters for the copy of the Sportsman which was to be found on the hall table with the letters.  Whoever got it usually gloated over it in silence till urged wrathfully by the multitude to let them know what had happened; when it would appear that Joe had notched his seventh century, or that Reggie had been run out when he was just getting set, or, as sometimes occurred, that that ass Frank had dropped Fry or Hayward in the slips before he had scored, with the result that the spared expert had made a couple of hundred and was still going strong.

In such a case the criticisms of the family circle, particularly of the smaller Jackson sisters, were so breezy and unrestrained that Mrs. Jackson generally felt it necessary to apply the closure.  Indeed, Marjory Jackson, aged fourteen, had on three several occasions been fined pudding at lunch for her caustic comments on the batting of her brother Reggie in important fixtures.  Cricket was a tradition in the family, and the ladies, unable to their sorrow to play the game themselves, were resolved that it should not be their fault if the standard was not kept up.

On this particular morning silence reigned.  A deep gasp from some small Jackson, wrestling with bread-and-milk, and an occasional remark from Mr. Jackson on the letters he was reading, alone broke it.

Hes getting up, said Marjory.  I went in to see what he was doing, and he was asleep.  So, she added with a satanic chuckle, I squeezed a sponge over him.  He swallowed an awful lot, and then he woke up, and tried to catch me, so hes certain to be down soon.

Well, he was on his back with his mouth wide open.  I had to.  He was snoring like anything.

Mike will have to be more punctual when he goes to Wrykyn, he said.

Next term, said Mr. Jackson.  Ive just heard from Mr. Wain, he added across the table to Mrs. Jackson.  The house is full, but he is turning a small room into an extra dormitory, so he can take Mike after all.

The first comment on this momentous piece of news came from Bob Jackson.  Bob was eighteen.  The following term would be his last at Wrykyn, and, having won through so far without the infliction of a small brother, he disliked the prospect of not being allowed to finish as he had begun.