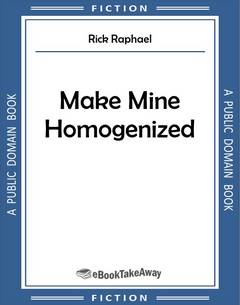 SHOO," Hetty Thompson cried, waving her battered old felt hat at the clucking cluster of hens eddying around her legs as she plowed through the flock towards the chicken house. "Scat. You, Solomon," she called out, directing her words at the bobbing comb of the big rooster strutting at the edge of the mob. "Don't just stand there like a satisfied cowhand after a night in Reno. Get these noisy females outta my way." She batted at the hens and they scattered with angry squawks of protest.

Hetty paused in the doorway of the chicken house to allow her eyes to become accustomed to the cool gloom after the bright glare of the ranch yard. She could feel the first trickles of sweat forming under the man's shirt she was wearing as the hot, early morning Nevada sun beat down on her back in the doorway.

Moving carefully but quickly through the nests, she reached and groped for the eggs she knew would be found in the scattered straw. As she placed each find carefully in the bucket she carried, her lips moved in a soundless count. When she had finished, she straightened up and left the chicken house, her face reflecting minor irritation.

Again the hens swirled about her, hoping for the handfuls of cracked corn she usually tossed to them. On the other side of the yard Solomon stepped majestically along the edge of the vegetable garden, never crossing the hoed line separating garden from yard.

"You'd better stay over there, you no-account Lothario," Hetty growled. "Five eggs short this morning and all you do is act like you were just the business agent for this bunch of fugitives from a dumpling pot." Solomon cocked his head and stared Hetty down. She paused at the foot of the backporch steps and threw the rooster a final remark. "You don't do any better than this you're liable to wind up in that pot yourself." Solomon gave a scornful cluck. "Better still, I'll get me a young rooster in here and take over your job." Solomon let out a squawk and took out at a dead run, herding three hens before him towards the chicken house.

With a satisfied smile of triumph, Hetty climbed the steps and crossed to the kitchen door. She turned and looked back across the yard towards the barn and corrals.

"Barneeeeey," Hetty yelled. "Ain't you finished with that milking yet?"

"Comin' now, Miz Thompson," came the reply from the barn. Hetty let the screen door slam behind her as she walked into the kitchen and placed the bucket of eggs on the big work table. She had her arm up to wipe her moist forehead on the sleeve of her shirt when she spotted the golden egg lying in the middle of the others in the galvanized bucket.

She froze in the arm-lifted position for several seconds, staring at the dully glowing egg. Then she slowly reached out and picked it up. It was slightly heavier than a regular egg, but for the dull, gold-bronze metallic appearance of the shell, looked just like any of the other twenty-odd eggs in the bucket. She was still holding it in the palm of her hand when the kitchen door again slammed and the handy man limped into the room. He carried two pails of milk across the kitchen and set them down near the sink.

Hetty frowned at the egg in her hand without answering. Barney limped around the side of the table for a closer look. Sunlight streaming through the kitchen windows glinted on the shell of the odd egg. Barney's eyes grew round. "Now ain't that something," he whispered in awe.

Hetty started as though someone had snapped their fingers in front of her staring eyes. Her normal look of practical dubiousness returned.

"Huh," she snorted. "Even had me fooled for a second. Something wrong with this egg but it sure is shootin' ain't gold. One of them fool hens must of been pecking in the fertilizer storeroom and got herself an overdose of some of them minerals in that stuff.

"What are you staring at, you old fool," she glared at Barney. "It ain't gold." Hetty laid the egg at one side of the table. She walked to the sink and took a clean, two-gallon milk can from the drainboard and set it in the sink to fill it from the pails of rich, frothy milk Barney had brought in the pails.