Love Among the Chickens 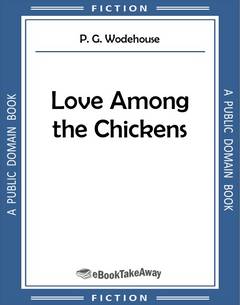 Read an excerpt and download Love Among the Chickens by P.G. Wodehouse for iPhone, iPad, Nook, Android, and Kindle in PDF and all popular eBook reader formats (AZW3, EPUB, MOBI).

Jeremy Garnet, an old friend of Stanley Featherstonehaugh Ukridge is invited to holiday with Ukridge and his new wife at his chicken farm in Dorset, England.

The story follows the ups and downs of Garnet's love life, and Ukridge's attempts to make a sucess of his chicken farm.

A LETTER WITH A POSTSCRIPT

"A gentleman called to see you when you were out last night, sir," said Mrs. Medley, my landlady, removing the last of the breakfast things.

"Thank you, sir," said Mrs. Medley, withdrawing from the presence.

Ukridge! Oh, hang it! I had not met him for years, and, glad as I am, as a general thing, to see the friends of my youth when they drop in for a chat, I doubted whether I was quite equal to Ukridge at the moment. A stout fellow in both the physical and moral sense of the words, he was a trifle too jumpy for a man of my cloistered and intellectual life, especially as just now I was trying to plan out a new novel, a tricky job demanding complete quiet and seclusion. It had always been my experience that, when Ukridge was around, things began to happen swiftly and violently, rendering meditation impossible. Ukridge was the sort of man who asks you out to dinner, borrows the money from you to pay the bill, and winds up the evening by embroiling you in a fight with a cabman. I have gone to Covent Garden balls with Ukridge, and found myself legging it down Henrietta Street in the grey dawn, pursued by infuriated costermongers.

I wondered how he had got my address, and on that problem light was immediately cast by Mrs. Medley, who returned, bearing an envelope.

"It came by the morning post, sir, but it was left at Number Twenty by mistake."

I recognised the handwriting. The letter, which bore a Devonshire postmark, was from an artist friend of mine, one Lickford, who was at present on a sketching tour in the west. I had seen him off at Waterloo a week before, and I remember that I had walked away from the station wishing that I could summon up the energy to pack and get off to the country somewhere. I hate London in July.

The letter was a long one, but it was the postscript which interested me most.

"... By the way, at Yeovil I ran into an old friend of ours, Stanley Featherstonehaugh Ukridge, of all people. As large as life—quite six foot two, and tremendously filled out. I thought he was abroad. The last I heard of him was that he had started for Buenos Ayres in a cattle ship, with a borrowed pipe by way of luggage. It seems he has been in England for some time. I met him in the refreshment-room at Yeovil Station. I was waiting for a down train; he had changed on his way to town. As I opened the door, I heard a huge voice entreating the lady behind the bar to 'put it in a pewter'; and there was S. F. U. in a villainous old suit of grey flannels (I'll swear it was the one he had on last time I saw him) with pince-nez tacked on to his ears with ginger-beer wire as usual, and a couple of inches of bare neck showing between the bottom of his collar and the top of his coat—you remember how he could never get a stud to do its work. He also wore a mackintosh, though it was a blazing day.

"He greeted me with effusive shouts. Wouldn't hear of my standing the racket. Insisted on being host. When we had finished, he fumbled in his pockets, looked pained and surprised, and drew me aside. 'Look here, Licky, old horse,' he said, 'you know I never borrow money. It's against my principles. But I must have a couple of bob. Can you, my dear good fellow, oblige me with a couple of bob till next Tuesday? I'll tell you what I'll do. (In a voice full of emotion). I'll let you have this (producing a beastly little threepenny bit with a hole in it which he had probably picked up in the street) until I can pay you back. This is of more value to me than I can well express, Licky, my boy. A very, very dear friend gave it to me when we parted, years ago... It's a wrench... Still,—no, no... You must take it, you must take it. Licky, old man, shake hands, old horse. Shake hands, my boy.' He then tottered to the bar, deeply moved, and paid up out of the five shillings which he had made it as an after-thought. He asked after you, and said you were one of the noblest men on earth. I gave him your address, not being able to get out of it, but if I were you I should fly while there is yet time."

It seemed to me that the advice was good and should be followed. I needed a change of air. London may have suited Doctor Johnson, but in the summer time it is not for the ordinary man. What I wanted, to enable me to give the public of my best (as the reviewer of a weekly paper, dealing with my last work, had expressed a polite hope that I would continue to do) was a little haven in the country somewhere.