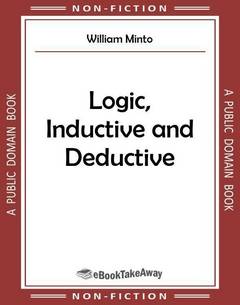 I.—THE ORIGIN AND SCOPE OF LOGIC.

The question has sometimes been asked, Where should we begin in Logic? Particularly within the present century has this difficulty been felt, when the study of Logic has been revived and made intricate by the different purposes of its cultivators.

Where did the founder of Logic begin? Where did Aristotle begin? This seems to be the simplest way of settling where we should begin, for the system shaped by Aristotle is still the trunk of the tree, though there have been so many offshoots from the old stump and so many parasitic plants have wound themselves round it that Logic is now almost as tangled a growth as the Yews of Borrowdale—

An intertwisted mass of fibres serpentine

It used to be said that Logic had remained for two thousand years precisely as Aristotle left it. It was an example of a science or art perfected at one stroke by the genius of its first inventor. The bewildered student must often wish that this were so: it is only superficially true. Much of Aristotle's nomenclature and his central formulæ have been retained, but they have been very variously supplemented and interpreted to very different purposes—often to no purpose at all.

The Cambridge mathematician's boast about his new theorem—"The best of it all is that it can never by any possibility be made of the slightest use to anybody for anything"—might be made with truth about many of the later developments of Logic. We may say the same, indeed, about the later developments of any subject that has been a playground for generation after generation of acute intellects, happy in their own disinterested exercise. Educational subjects—subjects appropriated for the general schooling of young minds—are particularly apt to be developed out of the lines of their original intention. So many influences conspire to pervert the original aim. The convenience of the teacher, the convenience of the learner, the love of novelty, the love of symmetry, the love of subtlety; easy-going indolence on the one hand and intellectual restlessness on the other—all these motives act from within on traditional matter without regard to any external purpose whatever. Thus in Logic difficulties have been glossed over and simplified for the dull understanding, while acute minds have revelled in variations and new and ingenious manipulations of the old formulæ, and in multiplication and more exact and symmetrical definition of the old distinctions.

To trace the evolution of the forms and theories of Logic under these various influences during its periods of active development is a task more easily conceived than executed, and one far above the ambition of an introductory treatise. But it is well that even he who writes for beginners should recognise that the forms now commonly used have been evolved out of a simpler tradition. Without entering into the details of the process, it is possible to indicate its main stages, and thus furnish a clue out of the modern labyrinthine confusion of purposes.

How did the Aristotelian Logic originate? Its central feature is the syllogistic forms. In what circumstances did Aristotle invent these? For what purpose? What use did he contemplate for them? In rightly understanding this, we shall understand the original scope or province of Logic, and thus be in a position to understand more clearly how it has been modified, contracted, expanded, and supplemented.

Logic has always made high claims as the scientia scientiarum, the science of sciences. The builders of this Tower of Babel are threatened in these latter days with confusion of tongues. We may escape this danger if we can recover the designs of the founder, and of the master-builders who succeeded him.

Aristotle's Logic has been so long before the world in abstract isolation that we can hardly believe that its form was in any way determined by local accident. A horror as of sacrilege is excited by the bare suggestion that the author of this grand and venerable work, one of the most august monuments of transcendent intellect, was in his day and generation only a pre-eminent tutor or schoolmaster, and that his logical writings were designed for the accomplishment of his pupils in a special art in which every intellectually ambitious young Athenian of the period aspired to excel. Yet such is the plain fact, baldly stated. Aristotle's Logic in its primary aim was as practical as a treatise on Navigation, or "Cavendish on Whist". The latter is the more exact of the two comparisons. It was in effect in its various parts a series of handbooks for a temporarily fashionable intellectual game, a peculiar mode of disputation or dialectic, the game of Question and Answer, the game so fully illustrated in the Dialogues of Plato, the game identified with the name of Socrates.

We may lay stress, if we like, on the intellectuality of the game, and the high topics on which it was exercised. It was a game that could flourish only among a peculiarly intellectual people; a people less acute would find little sport in it. The Athenians still take a singular delight in disputation. You cannot visit Athens without being struck by it. You may still see groups formed round two protagonists in the cafés or the squares, or among the ruins of the Acropolis, in a way to remind you of Socrates and his friends. They do not argue as Gil Blas and his Hibernians did with heat and temper, ending in blows. They argue for the pure love of arguing, the audience sitting or standing by to see fair play with the keenest enjoyment of intellectual thrust and parry. No other people could argue like the Greeks without coming to blows. It is one of their characteristics now, and so it was in old times two thousand years ago. And about a century before Aristotle reached manhood, they had invented this peculiarly difficult and trying species of disputative pastime, in which we find the genesis of Aristotle's logical treatises.

To get a proper idea of this debate by Question and Answer, which we may call Socratic disputation after its most renowned master, one must read some of the dialogues of Plato. I will indicate merely the skeleton of the game, to show how happily it lent itself to Aristotle's analysis of arguments and propositions.