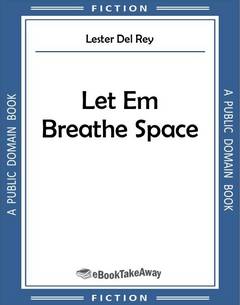 Eighteen men and two women in the closed world of a space ship for five months can only spell tension and trouble—but in this case, the atmosphere was literally poisoned.

Five months out from Earth, we were half-way to Saturn and three-quarters of the way to murder. At least, I was. I was sick of the feuding, the worries and the pettiness of the other nineteen aboard. My stomach heaved at the bad food, the eternal smell of people, and the constant sound of nagging and complaints. For ten lead pennies, I'd have gotten out into space and tried walking back to Earth. Sometimes I thought about doing it without the pennies.

But I knew I wasn't that tough, in spite of what I looked. I'd been built to play fullback, and my questionable brunet beauty had been roughed up by the explosion years before as thoroughly as dock fighting on all the planets could have done. But sometimes I figured all that meant was that there was more of me to hurt, and that I'd had more experience screaming when the anodyne ran out.

Anyhow, whole-wheat pancakes made with sourdough for the ninth "morning" running was too damned much! I felt my stomach heave over again, took one whiff of the imitation maple syrup, and shoved the mess back fast while I got up faster.

It was a mistake. Phil Riggs, our scrawny, half-pint meteorologist, grinned nastily and reached for the plate. "'Smatter, Paul? Don't you like your breakfast? It's good for you—whole wheat contains bran. The staff of life. Man, after that diet of bleached paste...."

There's one guy like that in every bunch. The cook was mad at us for griping about his coffee, so our group of scientists on this cockeyed Saturn Expedition were getting whole wheat flour as punishment, while Captain Muller probably sat in his cabin chuckling about it. In our agreement, there was a clause that we could go over Muller's head on such things with a unanimous petition—but Riggs had spiked that. The idiot liked bran in his flour, even for pancakes!

Or else he was putting on a good act for the fun of watching the rest of us suffer.

"You can take your damned whole wheat and stuff it—" I started. Then I shrugged and dropped it. There were enough feuds going on aboard the cranky old Wahoo! "Seen Jenny this morning, Phil?"

He studied me insolently. "She told Doc Napier she had some stuff growing in hydroponics she wanted to look at. You're wasting your time on that babe, boy!"

"Thanks for nothing," I muttered at him, and got out before I really decided on murder. Jenny Sanderson was our expedition biologist. A natural golden blonde, just chin-high on me, and cute enough to earn her way through a Ph. D. doing modelling. She had a laugh that would melt a brass statue and which she used too much on Doc Napier, on our chief, and even on grumpy old Captain Muller—but sometimes she used it on me, when she wanted something. And I never did have much use for a girl who was the strong independent type where there was a man to do the dirty work, so that was okay.

I suppose it was natural, with only two women among eighteen men for month after month, but right then I probably liked Doc Napier less than the captain, even. I pulled myself away from the corridor to hydroponics, started for observation, and then went on into the cubbyhole they gave me for a cabin. On the Wahoo, all a man could do was sleep or sit around and think about murder.