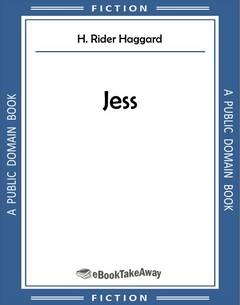 JOHN HAS AN ADVENTURE

The day had been very hot even for the Transvaal, where the days still know how to be hot in the autumn, although the neck of the summer is broken—especially when the thunderstorms hold off for a week or two, as they do occasionally. Even the succulent blue lilies—a variety of the agapanthus which is so familiar to us in English greenhouses—hung their long trumpet-shaped flowers and looked oppressed and miserable, beneath the burning breath of the hot wind which had been blowing for hours like the draught from a volcano. The grass, too, near the wide roadway that stretched in a feeble and indeterminate fashion across the veldt, forking, branching, and reuniting like the veins on a lady's arm, was completely coated over with a thick layer of red dust. But the hot wind was going down now, as it always does towards sunset. Indeed, all that remained of it were a few strictly local and miniature whirlwinds, which would suddenly spring up on the road itself, and twist and twirl fiercely round, raising a mighty column of dust fifty feet or more into the air, where it hung long after the wind had passed, and then slowly dissolved as its particles floated to the earth.

Advancing along the road, in the immediate track of one of these desultory and inexplicable whirlwinds, was a man on horseback. The man looked limp and dirty, and the horse limper and dirtier. The hot wind had "taken all the bones out of them," as the Kafirs say, which was not very much to be wondered at, seeing that they had been journeying through it for the last four hours without off-saddling. Suddenly the whirlwind, which had been travelling along smartly, halted, and the dust, after revolving a few times in the air like a dying top, slowly began to disperse in the accustomed fashion. The man on the horse halted also, and contemplated it in an absent kind of way.

"It's just like a man's life," he said aloud to his horse, "coming from nobody knows where, nobody knows why, and making a little column of dust on the world's highway, then passing away, leaving the dust to fall to the ground again, to be trodden under foot and forgotten."

The speaker, a stout, well set-up, rather ugly man, apparently on the wrong side of thirty, with pleasant blue eyes and a reddish peaked beard, laughed a little at his own sententious reflection, and then gave his jaded horse a tap with the sjambock in his hand.

"Come on, Blesbok," he said, "or we shall never get to old Croft's place to-night. By Jove! I believe that must be the turn," and he pointed with his whip to a little rutty track that branched from the Wakkerstroom main road and stretched away towards a curious isolated hill with a large flat top, which rose out of the rolling plain some four miles to the right. "The old Boer said the second turn," he went on still talking to himself, "but perhaps he lied. I am told that some of them think it is a good joke to send an Englishman a few miles wrong. Let's see, they told me the place was under the lee of a table-topped hill, about half an hour's ride from the main road, and that is a table-topped hill, so I think I will try it. Come on, Blesbok," and he put the tired nag into a sort of "tripple," or ambling canter much affected by South African horses.

"Life is a queer thing," reflected Captain John Niel to himself as he cantered along slowly. "Now here am I, at the age of thirty-four, about to begin the world again as assistant to an old Transvaal farmer. It is a pretty end to all one's ambitions, and to fourteen years' work in the army; but it is what it has come to, my boy, so you had better make the best of it."

Just then his cogitations were interrupted, for on the farther side of a gentle slope suddenly there appeared an extraordinary sight. Over the crest of the rise of land, now some four or five hundred yards away, a pony with a lady on its back galloped wildly, and after it, with wings spread and outstretched neck, a huge cock ostrich was speeding in pursuit, covering twelve or fifteen feet at every stride of its long legs. The pony was still twenty yards ahead of the bird, and travelling towards John rapidly, but strive as it would it could not distance the swiftest thing on all the earth. Five seconds passed—the great bird was close alongside now—Ah! and John Niel turned sick and shut his eyes as he rode, for he saw the ostrich's thick leg fly high into the air and then sweep down like a leaded bludgeon!

Thud! It had missed the lady and struck her horse upon the spine, just behind the saddle, for the moment completely paralysing it so that it fell all of a heap on to the veldt. In a moment the girl on its back was up and running towards him, and after her came the ostrich. Up went the great leg again, but before it could come crashing across her shoulders she had flung herself face downwards on the grass. In an instant the huge bird was on the top of her, kicking at her, rolling over her, and crushing the very life out of her. It was at this juncture that John Niel arrived upon the scene. The moment the ostrich saw him it gave up its attacks upon the lady on the ground and began to waltz towards him with the pompous sort of step that these birds sometimes assume before they give battle. Now Captain Niel was unaccustomed to the pleasant ways of ostriches, and so was his horse, which showed a strong inclination to bolt; as, indeed, under other circumstances, his rider would have been glad to do himself. But he could not abandon beauty in distress, so, finding it impossible to control his horse, he slipped off it, and with the sjambock or hide-whip in his hand valiantly faced the enemy. For a moment or two the great bird stood still, blinking its lustrous round eyes at him and gently swaying its graceful neck to and fro.

Then all of a sudden it spread out its wings and came for him like a thunderbolt. John sprang to one side, and was aware of a rustle of rushing feathers, and of a vision of a thick leg striking downwards past his head. Fortunately it missed him, and the ostrich sped on like a flash. Before he could turn, however, it was back and had landed the full weight of one of its awful forward kicks on the broad of his shoulders, and away he went head-over-heels like a shot rabbit. In a second he was on his legs again, shaken indeed, but not much the worse, and perfectly mad with fury and pain. At him came the ostrich, and at the ostrich went he, catching it a blow across the slim neck with his sjambock that staggered it for a moment. Profiting by the check, he seized the bird by the wing and held on like grim death with both hands. Now they began to gyrate, slowly at first, then quicker, and yet more quick, till at last it seemed to Captain John Niel that time and space and the solid earth were nothing but a revolving vision fixed somewhere in the watches of the night. Above him, like a stationary pivot, towered the tall graceful neck, beneath him spun the top-like legs, and in front of him was a soft black and white mass of feathers.