Impressions of Theophrastus Such 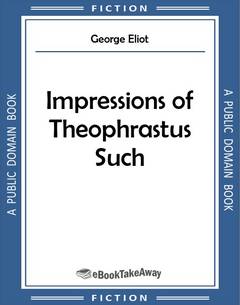 Download Impressions of Theophrastus Such by George Eliot for iPhone, iPad, Nook, Android, and Kindle in PDF and all popular eBook reader formats (AZW3, EPUB, MOBI).

It is my habit to give an account to myself of the characters I meet with: can I give any true account of my own? I am a bachelor, without domestic distractions of any sort, and have all my life been an attentive companion to myself, flattering my nature agreeably on plausible occasions, reviling it rather bitterly when it mortified me, and in general remembering its doings and sufferings with a tenacity which is too apt to raise surprise if not disgust at the careless inaccuracy of my acquaintances, who impute to me opinions I never held, express their desire to convert me to my favourite ideas, forget whether I have ever been to the East, and are capable of being three several times astonished at my never having told them before of my accident in the Alps, causing me the nervous shock which has ever since notably diminished my digestive powers. Surely I ought to know myself better than these indifferent outsiders can know me; nay, better even than my intimate friends, to whom I have never breathed those items of my inward experience which have chiefly shaped my life.

Yet I have often been forced into the reflection that even the acquaintances who are as forgetful of my biography and tenets as they would be if I were a dead philosopher, are probably aware of certain points in me which may not be included in my most active suspicion. We sing an exquisite passage out of tune and innocently repeat it for the greater pleasure of our hearers. Who can be aware of what his foreign accent is in the ears of a native? And how can a man be conscious of that dull perception which causes him to mistake altogether what will make him agreeable to a particular woman, and to persevere eagerly in a behaviour which she is privately recording against him? I have had some confidences from my female friends as to their opinion of other men whom I have observed trying to make themselves amiable, and it has occurred to me that though I can hardly be so blundering as Lippus and the rest of those mistaken candidates for favour whom I have seen ruining their chance by a too elaborate personal canvass, I must still come under the common fatality of mankind and share the liability to be absurd without knowing that I am absurd. It is in the nature of foolish reasoning to seem good to the foolish reasoner. Hence with all possible study of myself, with all possible effort to escape from the pitiable illusion which makes men laugh, shriek, or curl the lip at Folly's likeness, in total unconsciousness that it resembles themselves, I am obliged to recognise that while there are secrets in me unguessed by others, these others have certain items of knowledge about the extent of my powers and the figure I make with them, which in turn are secrets unguessed by me. When I was a lad I danced a hornpipe with arduous scrupulosity, and while suffering pangs of pallid shyness was yet proud of my superiority as a dancing pupil, imagining for myself a high place in the estimation of beholders; but I can now picture the amusement they had in the incongruity of my solemn face and ridiculous legs. What sort of hornpipe am I dancing now?

Thus if I laugh at you, O fellow-men! if I trace with curious interest your labyrinthine self-delusions, note the inconsistencies in your zealous adhesions, and smile at your helpless endeavours in a rashly chosen part, it is not that I feel myself aloof from you: the more intimately I seem to discern your weaknesses, the stronger to me is the proof that I share them. How otherwise could I get the discernment?for even what we are averse to, what we vow not to entertain, must have shaped or shadowed itself within us as a possibility before we can think of exorcising it. No man can know his brother simply as a spectator. Dear blunderers, I am one of you. I wince at the fact, but I am not ignorant of it, that I too am laughable on unsuspected occasions; nay, in the very tempest and whirlwind of my anger, I include myself under my own indignation. If the human race has a bad reputation, I perceive that I cannot escape being compromised. And thus while I carry in myself the key to other men's experience, it is only by observing others that I can so far correct my self-ignorance as to arrive at the certainty that I am liable to commit myself unawares and to manifest some incompetency which I know no more of than the blind man knows of his image in the glass.