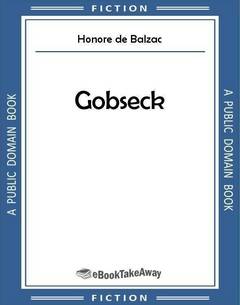 Beginning life as a cabin boy, Gobseck works his way up while traveling around the world and becomes rich and a miser.

His philosophy of never helping anyone because "adversity is the greatest of all teachers" becomes well known.

Gobseck also believes that all the peoples of the world are really very much alike because money is the greatest common denominator.

It was one o'clock in the morning, during the winter of 1829-30, but in the Vicomtesse de Grandlieu's salon two persons stayed on who did not belong to her family circle. A young and good-looking man heard the clock strike, and took his leave. When the courtyard echoed with the sound of a departing carriage, the Vicomtesse looked up, saw that no one was present save her brother and a friend of the family finishing their game of piquet, and went across to her daughter. The girl, standing by the chimney-piece, apparently examining a transparent fire-screen, was listening to the sounds from the courtyard in a way that justified certain maternal fears.

"Camille," said the Vicomtesse, "if you continue to behave to young Comte de Restaud as you have done this evening, you will oblige me to see no more of him here. Listen, child, and if you have any confidence in my love, let me guide you in life. At seventeen one cannot judge of past or future, nor of certain social considerations. I have only one thing to say to you. M. de Restaud has a mother, a mother who would waste millions of francs; a woman of no birth, a Mlle. Goriot; people talked a good deal about her at one time. She behaved so badly to her own father, that she certainly does not deserve to have so good a son. The young Count adores her, and maintains her in her position with dutifulness worthy of all praise, and he is extremely good to his brother and sister. But however admirable his behavior may be," the Vicomtesse added with a shrewd expression, "so long as his mother lives, any family would take alarm at the idea of intrusting a daughter's fortune and future to young Restaud."

"I overheard a word now and again in your talk with Mlle. de Grandlieu," cried the friend of the family, "and it made me anxious to put in a word of my own. I have won, M. le Comte," he added, turning to his opponent. "I shall throw you over and go to your niece's assistance."