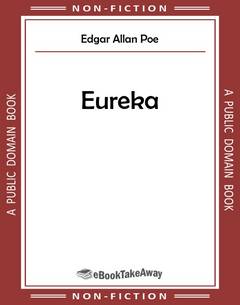 AN ESSAY ON THE MATERIAL AND SPIRITUAL UNIVERSE.

It is with humility really unassumed—it is with a sentiment even of awe—that I pen the opening sentence of this work: for of all conceivable subjects I approach the reader with the most solemn—the most comprehensive—the most difficult—the most august.

I design to speak of the Physical, Metaphysical and Mathematical—of the Material and Spiritual Universe:—of its Essence, its Origin, its Creation, its Present Condition and its Destiny. I shall be so rash, moreover, as to challenge the conclusions, and thus, in effect, to question the sagacity, of many of the greatest and most justly reverenced of men.

In the beginning, let me as distinctly as possible announce—not the theorem which I hope to demonstrate—for, whatever the mathematicians may assert, there is, in this world at least, no such thing as demonstration—but the ruling idea which, throughout this volume, I shall be continually endeavoring to suggest.

My general proposition, then, is this:—In the Original Unity of the First Thing lies the Secondary Cause of All Things, with the Germ of their Inevitable Annihilation.

In illustration of this idea, I propose to take such a survey of the Universe that the mind may be able really to receive and to perceive an individual impression.

He who from the top of Ætna casts his eyes leisurely around, is affected chiefly by the extent and diversity of the scene. Only by a rapid whirling on his heel could he hope to comprehend the panorama in the sublimity of its oneness. But as, on the summit of Ætna, no man has thought of whirling on his heel, so no man has ever taken into his brain the full uniqueness of the prospect; and so, again, whatever considerations lie involved in this uniqueness, have as yet no practical existence for mankind.

I do not know a treatise in which a survey of the Universe—using the word in its most comprehensive and only legitimate acceptation—is taken at all:—and it may be as well here to mention that by the term “Universe,” wherever employed without qualification in this essay, I mean to designate the utmost conceivable expanse of space, with all things, spiritual and material, that can be imagined to exist within the compass of that expanse. In speaking of what is ordinarily implied by the expression, “Universe,” I shall take a phrase of limitation—“the Universe of stars.” Why this distinction is considered necessary, will be seen in the sequel.

But even of treatises on the really limited, although always assumed as the unlimited, Universe of stars, I know none in which a survey, even of this limited Universe, is so taken as to warrant deductions from its individuality. The nearest approach to such a work is made in the “Cosmos” of Alexander Von Humboldt. He presents the subject, however, not in its individuality but in its generality. His theme, in its last result, is the law of each portion of the merely physical Universe, as this law is related to the laws of every other portion of this merely physical Universe. His design is simply synœretical. In a word, he discusses the universality of material relation, and discloses to the eye of Philosophy whatever inferences have hitherto lain hidden behind this universality. But however admirable be the succinctness with which he has treated each particular point of his topic, the mere multiplicity of these points occasions, necessarily, an amount of detail, and thus an involution of idea, which precludes all individuality of impression.