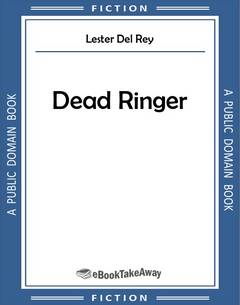 There was nothing, especially on Earth, which could set him free—the truth least of all!

Dane Phillips slouched in the window seat, watching the morning crowds on their way to work and carefully avoiding any attempt to read Jordan's old face as the editor skimmed through the notes. He had learned to make his tall, bony body seem all loose-jointed relaxation, no matter what he felt. But the oversized hands in his pockets were clenched so tightly that the nails were cutting into his palms.

Every tick of the old-fashioned clock sent a throb racing through his brain. Every rustle of the pages seemed to release a fresh shot of adrenalin into his blood stream. This time, his mind was pleading. It has to be right this time....

Jordan finished his reading and shoved the folder back. He reached for his pipe, sighed, and then nodded slowly. "A nice job of researching, Phillips. And it might make a good feature for the Sunday section, at that."

It took a second to realize that the words meant acceptance, for Phillips had prepared himself too thoroughly against another failure. Now he felt the tautened muscles release, so quickly that he would have fallen if he hadn't been braced against the seat.

He groped in his mind, hunting for words, and finding none. There was only the hot, sudden flame of unbelieving hope. And then an almost blinding exultation.