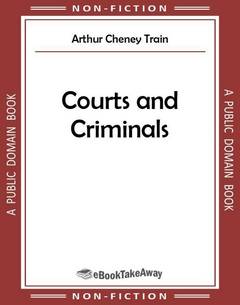 CHAPTER I. The Pleasant Fiction of the Presumption of Innocence

There was a great to-do some years ago in the city of New York over an ill-omened young person, Duffy by name, who, falling into the bad graces of the police, was most incontinently dragged to headquarters and "mugged" without so much as "By your leave, sir," on the part of the authorities. Having been photographed and measured (in most humiliating fashion) he was turned loose with a gratuitous warning to behave himself in the future and see to it that he did nothing which might gain him even more invidious treatment.

Now, although many thousands of equally harmless persons had been similarly treated, this particular outrage was made the occasion of a vehement protest to the mayor of the city by a certain member of the judiciary, who pointed out that such things in a civilized community were shocking beyond measure, and called upon the mayor to remove the commissioner of police and all his staff of deputy commissioners for openly violating the law which they were sworn to uphold. But, the commissioner of police, who had sometimes enforced the penal statutes in a way to make him unpopular with machine politicians, saw nothing wrong in what he had done, and, what was more, said so most outspokenly. The judge said, "You did," and the commissioner said, "I didn't." Specifically, the judge was complaining of what had been done to Duffy, but more generally he was charging the police with despotism and oppression and with systematically disregarding the sacred liberties of the citizens which it was their duty to protect.

Accordingly the mayor decided to look into the matter for himself, and after a lengthy investigation came to the alleged conclusion that the "mugging" of Duffy was a most reprehensible thing and that all those who were guilty of having any part therein should be instantly removed from office. He, therefore, issued a pronunciamento to the commissioner demanding the official heads of several of his subordinates, which order the commissioner politely declined to obey. The mayor thereupon removed him and appointed a successor, ostensibly for the purpose of having in the office a man who should conduct the police business of the city with more regard for the liberties of the inhabitants thereof. The judge who had started the rumpus expressed himself as very much pleased and declared that now at last a new era had dawned wherein the government was to be administered with a due regard for law.

Now, curiously enough, although the judge had demanded the removal of the commissioner on the ground that he had violated the law and been guilty of tyrannous and despotic conduct, the mayor had ousted him not for pursuing an illegal course in arresting and "mugging" a presumptively innocent man (for illegal it most undoubtedly was), but for inefficiency and maladministration in his department.

Said the mayor in his written opinion:

"After thinking over this matter with the greatest care, I am led to the conclusion that as mayor of the city of New York I should not order the police to stop taking photographs of people arrested and accused of crime or who have been indicted by grand juries. That grave injustice may occur the Duffy case has demonstrated, but I feel that it is not the taking of the photograph that has given cause to the injustice, but the inefficiency and maladministration of the police department, etc."

In other words, the mayor set the seal of his official approval upon the very practice which caused the injustice to Duffy. "Mugging" was all right, so long as you "mugged" the right persons.

The situation thus outlined was one of more than passing interest. A sensitive point in our governmental nervous system had been touched and a condition uncovered that sooner or later must be diagnosed and cured.

For the police have no right to arrest and photograph a citizen unconvicted of crime, since it is contrary to law. And it is ridiculous to assert that the very guardians of the law may violate it so long as they do so judiciously and do not molest the Duffys. The trouble goes deeper than that. The truth is that we are up against that most delicate of situations, the concrete adjustment of a theoretical individual right to a practical necessity. The same difficulty has always existed and will always continue to exist whenever emergencies requiring prompt and decisive action arise or conditions obtain that must be handled effectively without too much discussion. It is easy while sitting on the piazza with your cigar to recognize the rights of your fellow-men, you may assert most vigorously the right of the citizen to immunity from arrest without legal cause, but if you saw a seedy character sneaking down a side street at three o'clock in the morning, his pockets bulging with jewelry and silver! Would you have the policeman on post insist on the fact that a burglary had been committed being established beyond peradventure before arresting the suspect, who in the meantime would undoubtedly escape? Of course, the worthy officer sometimes does this, but his conduct in that case becomes the subject of an investigation on the part of his superiors. In fact, the rules of the New York police department require him to arrest all persons carrying bags in the small hours who cannot give a satisfactory account of themselves. Yet there is no such thing under the laws of the State as a right "to arrest on suspicion." No citizen may be arrested under the statutes unless a crime has actually been committed. Thus, the police regulations deliberately compel every officer either to violate the law or to be made the subject of charges for dereliction of duty. A confusing state of things, truly, to a man who wants to do his duty by himself and by his fellow-citizens!